Richard L. Provencher has many story-poems published Online and in Print. His writing is about everyday situations and his work gives voice to the not so noticeable. He and his wife, Esther have lived in Truro, Nova Scotia since 1986.

Richard was a member of the Writers’ Federation of Nova Scotia for many years, until his stroke on August 26, 1999. He had been a Writer-in-the-Schools Program under their auspices for eleven years. Esther enjoys art-painting, and her church work. Richard enjoys writing poetry, as he continues to challenge the continuing side effects from his Brain Aneurysm.

Esther & Richard Provencher created many of their stories & novels from experiences in raising four children, as well as being foster & adopting parents. Richard was born in Rouyn-Noranda, Quebec. Esther was born in Cape Spear, New Brunswick. They were married in Sarnia, Ontario and later moved to Wyoming, Ontario in 1980 and then to Truro, Nova Scotia, in 1986. 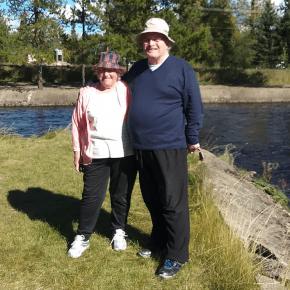 PUGSLEY A Face in the Clouds Oh, Oh Dinosaurs In My Bed The Friendship Club A Grand Journey A Christmas Story A Wish For Christmas Night Dream A LADY CALLED MRS. GRAHAM THE GUMMY DOG SHOW WHEN SANTA COMES When Shadows Come The Clam Said, Ouch! A Boy Made Happy Voice in a Bottle PERRY PARTRIDGE The Hole Story Hello Me Friendship CALLING OF THE LOONS At Red Rock The Paper Boy When Eagles Soar Up, Up and Away UGG…YAAK

Wait for Me The Double Bump Boy Happy Morning As a Child Learns A Son A Busy Boy A Child of God Feast of Summer Doggone Ace A Boy and His Dog A Little Boy Green or Blue? A Birch Tree A Jewel Being King Summertime Little Tyke My Face

A Poem for Jesus