Joe liked hikes. And this one was going to be really cool. Ted, his best pal was here. Other friends included Martin, Greg and Josh. Mr. Maxwell was the group church leader. And his assistant Larry was also Joe's big Brother.

They all crawled into the Safari Wagon. Each kid tumbled around until they found a soft spot. The ride would take a half hour. Destination: an underground cave.

"It's closed up now but a great trail goes right by it," Mr. Maxwell explained. He also asked everyone not to stand too close to the old entrance. "Rock slides happen all the time," he said. 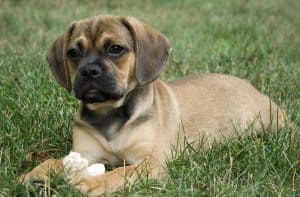 to bring his dog, Pugsley. He was brown with a pug-nose. Joe had gotten him for his seventh birthday. In the last two years they became really good pals.

His mother helped him pack this morning. Joe was so excited he couldn't find his packsack. Or his spare socks, or his thermos.

Good ole mom. "Bring my boy back safely," she had prayed over him.

Prayers were okay. But he could take care of himself. Besides, Pugsley was coming along.

As they drove from Truro they passed the low tide area of Cobequid Bay. Then traveled along a twisting road through the settlements of Old Barns and Prince Port. Before long the asphalt road turned into a pitted gravel road. Mud and water flew in all directions.

Suddenly the driving was over. "We're here!" everyone shouted.

A scramble of feet, packsacks pressed to shoulders, car doors locked and the hike was begun. Mr. Maxwell led the way, followed by anxious and noisy boys. Larry took up the last spot.

"I expect everyone to follow single file on the trail," Mr. Maxwell said. He was not only the Pastor, but everyone respected him. So they listened.

Pugsley’s excitement took him in little circles. The exercise was good for him. Joe remembered the little dog the first time he saw him. He had watched when the dogcatcher tricked the little dog by offering him a juicy bone.

When the net came down, Joe thought it was a mean trick. After mom and dad heard their son's sad tale they just had to see this dog. And maybe bring him home. Joe promised to take good care of the frisky pooch. That was the bargain. And so Pugsley found a new home.

Now Pugsley tore across the trail and into the trees. He went up one ravine, then down another. Joe didn't have to call him back, since Pugsley always returned to his master.

When they came to the river Pastor Maxwell put on his chest waders. Then tied a pope to a tree by the water's edge. After crossing over he tied the strong yellow rope to another tree. Low and then higher up. And he returned to the same side he had left.

When it was finished everyone saw it was like a walkway. One line was on the bottom for feet and the other shoulder high to hold onto.

This allowed each boy to cross the stream without getting wet; and everyone crossed safely.

"I did it!" Joe yelled. He acted brave even though he was afraid of heights. And didn't even fall in the water. 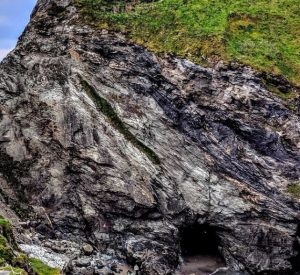 The hike continued after everyone crossed the river. There was more snow on this side. And crunching sounds filled the air. But the spring thaw and burst of sunshine meant it would not last. Joe was happy to be in the woods, as young legs stretched with each step.

Mr. Maxwell called everyone forward, as they approached a cliff rising above the trees. "This hill is quite high," he said. "And our trail goes close to the edge."

Both Pastor Maxwell and Larry helped everyone over the icy parts. Pugsley was fortunate to have hard toenails help with his balance. Joe suddenly began to slide towards the pond at the bottom of the hill. "Oh My Gosh," he said.

"Hold on Joe," Larry called, and scrambled after him. Joe's dignity and muddy bottom were quickly returned to the trail.

As they all got closer to the cliff they heard rustling noises. Pastor Maxwell said, "Like I said, stay close to the bottom of the cliff." Just then a large rock fell near one of the boys. Josh jumped then pressed against the side of the cliff.

"As long as we stay close to the cliff," Pastor Maxwell said, "everyone will be alright."

Joe held Pugsley's collar and looked around. A perfect toboggan hill lay to his right. Fallen rock had broken into fine pieces and created a long descending slope of light colored mud.

Finally, they reached their destination. Halen's Cave looked like a black smudge at the edge of the trail. Joe remembered looking down into a well once. The darkness had scared him.

“There’s about a four-foot drop into the entrance,” Pastor Maxwell said. “We can try climbing down this summer. Now, let’s take a break on the other side by the trees."

Curiosity tugged at Joe. Pugsley was restless too. Joe was last in line and had to get going to catch up to the group.

As he turned his hand dropped Pugsley's collar. The little dog scampered a few feet then slipped. Yelping several times he lost his balance and tumbled down into the black empty space of cave.

Joe was shocked. "My dog." he called out. "Mr. Maxwell!" he finally yelled. Dropping on his belly he looked down, barely able to see at first. Then his eyes got used to the darkness.

Pugsley looked like he was in a large cavern.

Joe reached down, trying to grab Pugsley's jumping paws. Just as he slid into the hole he heard Pastor Maxwell calling his name. Now boy and dog lay on the floor of the cavern. It was beautiful in here. Rivulets of water spilled from a crevice on one side of the wall.

It looked like moss around the floor and in one area, solid ice was smooth as glass. Joe looked around, but no Pugsley. He could hear barking far away. The cavern stretched a long distance.

He had to get his dog. Joe prayed for strength. Nothing bad could happen to him if he had faith. He remembered those special words from his Sunday School teaching. "Suffer the little children to come unto me," the Bible said.

Working up his courage, Joe moved forward, watching his step. He had to be careful not to twist an ankle on the ice. His breath produced mist in the cool air. He felt much better after praying for his little dog to return. Joe stopped, knowing enough not to go any further.

There could be more tunnels or even holes to fall into.

When Pugsley returned to his side, Joe’s voice sounded eerie when it said, "Thank you Jesus." The two of them then carefully worked their way back to the tunnel entrance.

Pastor Maxwell was frantic, asking loudly, "Are you okay? Are you?"

Joe felt badly. He didn't want his Pastor to be afraid. Joe wasn't. First he helped boost Pugsley out. Then it was his turn. Strong arms lifted him.

Everyone gave him a hug. He could see how nervous everyone was. Pastor said the hole was too small for himself or Larry.

Larry gave Joe a big wink. "I'm proud of you," he said. "You were very brave." The rest of the trip was icing on the cake. Having a prayer of thanks for Joe's safe return, eating lunch and a snowball fight.

By the time they returned to the rope crossing, Joe was too tired to hang on. So Larry carried him on his back through the shallow water. Joe felt like a conquering hero. He had overcome his fear of the dark to get his dog.

From here he could see everyone waiting on the other shore, even Pugsley who swam alongside. His wet little dog was also brave. Joe had a great day, with good friends. He gave Larry an extra hard squeeze around his neck.

Wait 'til mom hears about this trip, he thought. Joe's face broke into a smile. His lips said, "Thank you Jesus...for everything."