"Creepy here," Melanie said, looking around grandma and grandpa’s farm in the country.

"It's cool," Adam added cheerfully. His sister’s scowl made him change his mind.

“I mean, I’d rather be home with my friends,” he stammered.

Shaped shadows covered the ancient looking farmhouse. An owl hooted. Trees shook in the wind. And the moon’s face gleamed like a toothpaste commercial. 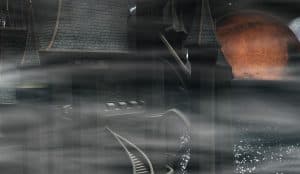 “Is that why you have the flashlight, Grandpa?” Adam asked.

“Yes. Besides, our lights went out a few times today,” grandpa answered.

Climbing the stairway seemed higher than the tree house in their backyard. Finally, adults and children arrived at a large bedroom.

“This is where you boys can sleep,” grandpa said. Colin held tightly onto his teddy bear. His neck hurt looking up at the high ceiling.

“And Melanie,” grandma said, “your room is just next door.”

“Can’t they afford stronger light bulbs?” Melanie whispered to Adam. Shadows were everywhere. Cobwebs filled with spiders must be around too, she wondered.

Their grandparents made sure the children were comfortable with extra blankets. "Don't let any strange sounds bother you," grandpa said with a wink.

Adams' eyes grew large. Shivers slithered down his neck. The adults 'yawned' loudly then headed off to bed.

Colin changed into nightclothes and jumped under the covers.

Melanie and Adam decided to watch some TV downstairs in the family room? Only one channel worked.

“Let’s explore instead,” Adam suggested. The building seemed large as a castle, and he loved to wander through old houses.

Suddenly the ceiling lights went out. They sat quietly, intakes of breath sounding loud in the stillness. A grandfather clock “ticked” off the hours loudly.

Trees scraped against the roof. Was that a loose shutter banging in the wind? Melanie thought.

“Hey, this is just like a horror movie on TV!” Adam exclaimed.

“SSSH!” Melanie said from the darkness. “Something’s moving in the hall.” “Could be grandma or grandpa?” Adam asked.

Both children got up, pressing their hands along the surface of the wall. Melanie found a doorknob and pulled.

“It must be a closet,” she said. Her fingers wrapped around a flashlight on the dusty shelf. “It works,” she said happily.

"Don't be such a sissy," Melanie huffed.

"It's true, I saw something." Adam moved the beam of light up and down the corner of the room. Nothing. "But, it was there," he whimpered.

Melanie was sure she heard something too. But didn't want to frighten her brother. To her, it sounded like voices on another floor. 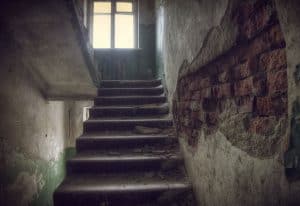 To get to them, brother and sister had to step around old barrels, a bicycle and piles of boxes.

"SSHHH! Not so loud, you might wake up grandma and grandpa. Probably old newspaper and magazines," Melanie answered.

“Any rum in those barrels?” Adam asked. “That’s what pirates drink. Maybe grandpa was one.”

Melanie placed her hand on Adam's shoulder. “Don’t be silly,” she said. “They probably only drink weak tea.”

Voices were definitely coming from the top of the stairs. Adam followed his sister as they went to investigate. It was hard to breathe from the dust.

“Why doesn’t grandma and grandpa ever clean up here?” he quietly asked.

Melanie stopped suddenly and her brother crashed into her. A shadowy figure stood at the top of the stairs!

Someone was tying up what looked like a small bundle. Then a child's sobbing sounded familiar. Adam shone the flashlight and spotted Colin. “Help me,” he said, rolling around as if trying to escape from something.

It was not the right time to ask why he wasn’t in bed, so Melanie and Adam charged up the stairs. But, Adam tripped and lost his flashlight. “Oh no!” he yelled.

Just before the lights came back on, someone screamed. And a thud landed below them. Adam and Melanie found a rope hanging from the banister and pulled it up.

As they pulled, pieces of straw kept falling off.

“Where did Colin go?” Melanie asked.

Instead of answering, Adam asked, “How can grandma and grandpa sleep with this racket going on?”

Suddenly laughter erupted from the loft above them.

It was hard to see, with only a 25-watt bulb in the hallway. Old family pictures covered the walls. And brother and sister could find no windows to look through.

“Colin, you up there?” they called. “Grandma! Grandpa!”

Both children climbed the last flight of stairs, finding a door leading to a balcony. They breathed in fresh air. Then hurried down an outside fire escape.

Shouts of, "There they are!" greeted them.

Three figures with droopy hats and long coats stood outside the barn. They were pointing and waving long sticks.

Melanie and Adam jumped from the remaining steps. They had to get away. Mom and dad should be returning soon. Later they could all search for Colin.

Adam needed someone to explain what was happening. One of the shadows ran forward and whacked him on the backside with a large broom.

"Ouch, that hurt!" he yelped. It felt like a porcupine quill pierced him. The wind began to howl, and another shadowy figure ran towards them.

Melanie shouted, “Let’s scat!” And feet flew quickly as a rabbit chased by coyotes. Gusts of wind pushed Adam ahead of his sister.

Suddenly, their parents drove up. What a tale they began to tell. Before you could say, "What's for breakfast?" a decision was made.

Parents and children marched towards the farmhouse. They were like a posse on their way to rescue Colin. As they approached, three figures came out of the barn.

One was quite short.

The others were grandpa and grandma.

All four adults exploded with laughter. Colin did his little boy giggle, since he and teddy were part of the joke.

“Remember?” mom said. “You thought coming to grandma’s and grandpa’s might be too dull. Well, what do you think now?” she chuckled.

The older children shook their heads and finally smiled. They were upset at first, but soon joined in the laughing. Yes, the joke was on them.

Melanie turned to her mom. “May we come back again next weekend?” she asked.