Dinosaurs In My Bed

Andrew lay shivering in his bed. The sky was alive with booming sounds and brilliant flashes just outside his window.

Fifteen minutes ago he asked, “Mom, will the storm last long?”

“Please, don’t worry,“ she said. “The weatherman promised it would pass over Truro quickly. Now get some sleep.”

Except it didn’t; and he couldn’t.

Andrew listened to his alarm clock. “Tick…Tick…Tock.” The night seemed to go on forever. Seconds turned into minutes.

Above the house, loud lightning crashes made him duck further under the blankets. Outside thunder even rattled his window.

Should he go into his parent’s room? But then he was a big boy now. And he had to be brave. Dad even helped him prepare for this bad weather.

Just in case it lasted all night.

Now his backpack was hidden under the blankets. It was filled with favorite toys, games and comic books. Even “Panda” bear he had since the age of two.

Mom made sure Andrew also had a few goodies. A huge bag of popcorn was close to his right side. And a bag of rippled chips was on the other.

His family had gone tenting in Cape Breton, last weekend. So he was now a boy with camping experience. And he knew how to be brave.

What was moving around his toes? “Ouch, that hurt,” his trembling voice, whispered. The noise outside was so loud Andrew could hardly think.

Through the window, a dark sky blocked out the stars.

The boy was suddenly nervous. What was under the blanket? He was curious and rummaged through his backpack.

He slid out of bed and hurled himself across the floor. Andrew hunted around until he found it in the top dresser drawer.

Quickly jumping back into bed, he forced cold feet down to the very end. Bare toes rested on something rough and sharp. Now it seemed to be crawling around his ankles.

Yikes! He wasn’t alone in bed! 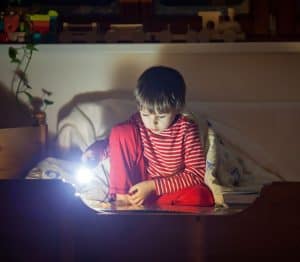 He checked under the covers where it was black as coal, almost like being outside. Instead of gleaming stars lit up, spots looked more like eyes.

Roaring came from behind his left leg.

Andrew chewed on his left thumb and turned on the flashlight. “That terrifying sound couldn’t be…?” he hesitated.

Yes, a dinosaur! But that was impossible, wasn’t it? Dinosaurs couldn’t fit under bed covers belonging to a little boy, living inside his house. Right?

Wrong. Staring back at him was a Stegosaurus. And it tasted his Hostess vinegar chips, the one small bag with a few morsels left.

“Get away, you!” Andrew bellowed, trying to be brave. The animal rumbled something back under the blanket-sky and hurried into a shadowy corner.

New noises caught the boy’s attention. His flashlight helped pick out moving shadows. What was going on? he wondered. There was a Triceratops and a Deinonychus.

“Run!” Andrew yelled. Suddenly he felt like he was the only one alive on the planet. But he was still under his blanket that seemed to expand in the distance and even high above him.

He searched for somewhere to hide.

Cold feet could barely move. It was like a different world under the blankets. His heart marched to the beat of a drum. Lightning zipped then zapped under his blanket-sky.

Racing toward him was a Dicraeosaurus. This was a peaceful plant eater and would not hurt him. But, Andrew couldn’t take any chances.

He pulled a fire engine from his backpack. Jumping into the front seat, Andrew turned the siren on full velocity. All it did was hurt his ears.

A Ceratosaurus and Albertosaurus bounded after him. They were like large friendly dogs wanting to play. But Andrew didn’t wish to get crushed.

He stepped on the gas pedal. And the fire engine leaped forward.

Soon, the road became a narrow path, aiming straight for the forest. Andrew quickly parked. Then he laced on new sneakers from his backpack.

He also brought his whistle. Shrill blowing warned everything to get out of his way. A flurry of feet escaped down the trail, each step pounding hard.

One arm held tightly to ‘Panda.’

The wind blew off his cap sending it into the distance. Branches snatched at his face. He didn’t want to get squashed or eaten by those dinosaurs.

The storm outside was nothing compared to wild animals chasing him under his blanket. How did all of this happen anyhow?

Growls and speeding feet kept pace behind him. Reaching into his backpack Andrew grabbed his roller blades. Now, he thought, it should be easy to skate away safely.

That is, until a sneaky tree root sent him headfirst into the mud.

Now it was hurry-up time to climb a tree.

“Mom, where are you?” Andrew shouted. “Daddd!” Skinny legs scrambled up the trunk. And like a monkey climbed higher from branch to branch.

Suddenly between two limbs was the head of a Brontosaurus. It smiled as it chewed a mouthful of leaves. “What’s your problem?” it seemed to say.

“Andrew! ANDREWWW!” someone called. Voices seemed to move back and forth and around like echoes. Yes, people were shouting his name!

The boy hastily threw off his blankets, sat up, and stared at mom and dad. He blinked as morning’s sun peeked between Venetian blinds.

“Panda” was still tucked securely under his arm.

“I see you found our surprises under your blankets,” mom said.

Andrew looked blankly at his mom.

“You know. Remember the dinosaur models you asked for last week?”

“And I’m proud of you,” dad said. “Look how neatly you stacked them on your dresser.”

In a neat row was a parade of colorful dinosaurs. They were following a friendly Dicraeosaurus, with a ferocious looking Tyrannosaurus Rex at the end of the line.

Leading the whole group was a figure of a little boy.

And he was holding tightly to a teddy bear.

All of the dinosaurs are correctly named in this Fantasy tale. My wife, Esther and I, also visited Drumheller, near Calgary Alberta where they once roamed.