A Face in the Clouds

A fishing trip will be good for you," mom said. "You never go anywhere anymore. This is your chance to get out in the woods. Now scoot. "

James didn't know his neighbor that well, even if he did deliver his early morning paper. He couldn’t even spell the guy’s name, let alone pronounce it. Carpen… something. Anyway, he was a fellow from Quebec mom knew.

Now he stared at his woodland surroundings. Scotch thistles kept trying to tear his skin apart. And deer flies dive-bombed his head. James was sure the mosquitoes must have taken most of his spare blood. Why did he agree to come anyways?

He felt like, ‘Son of Caveman’ walking through heavy bush; climbing mountains of rock and watching a river swirl at the bottom of this hill. It didn’t seem natural being away from sidewalks and houses with TV, with no jabbing moose flies checking out your blood type. Besides, he was tired of people feeling sorry for him, because dad died a few months ago. James sure missed him.

As he stood up a twig tried to scratch his eye out. And his jeans were damp. The man told him early morning dew is never dry. How come Mr. Carpen. . . thinks that's funny? James was really smart for his age, but not smart enough to figure out a good excuse to stay home.

"COOOMMMMIING?" The voice plunged like a Roman spear, as it whistled towards him, from below the hill. James cringed as he moved to the edge of this rocky ridge. Almost felt like being at the top of an avalanche with danger waiting below. Does he think I'm a mountain goat? The man below looked like a midget. How did he make it down there? Maybe he had a parachute.

"No way!" the boy shouted, looking at the fifty-foot drop.

"You calling me a scared-cat?" the boy shot back. But he was afraid. No so long ago he fell off a ladder trying to get their cat from up a tree. Dad said to wait. But James didn't. His back end still felt sore thinking about it.

The man came up part way and guided James down the slippery shale all the way to the Debert River shore. It was a magnificent view seeing where the narrow waterway wore a path through the rocky cliff. Their eyes feasted on the current as its movement tumbled down and down until it disappeared around a corner. “Speckled trout in all those waterfalls too," Mr. Carpentier said.

"Why do people like to catch fish anyways?" James huffed. "Besides, those scaly things stink. " The man pretended not to hear the boy's comments. He wasn't going to allow the peaceful spell of the outdoors be spoiled.

"Well?" But James was ignored and he didn't like it. Not one little bit. "All I can see is a lot of bush and rock," he added.

"I'm going to sit right here and not move. You can't make me fish in that river. Keep your old worms. Why did you bring me here anyways?"

“You said you wanted to come. ”

“Well, I changed my mind,” the boy snapped. Hey, what's wrong with this guy? He's smiling. Even after all the mean things James had said. He knew Mr. Carpen. . . was just trying to be nice.

"I'm sorry for being mean," he finally said. This was the second time today he had apologized. If mom were here, she would have fainted. His blond hair blew lazily in the wind. It was confusing. Dad should be here, not this stranger.

Mr. Carpentier slowly answered, "I accept your apology. Now I hope you're old enough to listen and stay in one spot. ”

Just the way dad would have said it, James thought.

“A person could get lost if they wandered around. I'll be up ahead. When you're ready to fish, call me. OK?"

"Okay. " James watched Mr. Carpen. . . move silently away, deftly casting a wiggling worm into rivulets along the way. His floppy hat brim swept up and down from the wind. Then James was alone. What to do? He looked at the river. “Magic,” the man had said.

"KERPLUNK!" James’ rock skipped four times. Not bad, first try. After awhile it got boring. What do you do for an encore after wrist-shooting about 25 flat stones?

James watched a crow flapping upwards to a crevice in the cliff. The other side must be almost a hundred feet up, he figured. The river wasn't very wide. Indeed, it was mostly full of little waterfalls, where the current bumped and scraped over boulders sending splashes of white into the air. He had to admit it looked awesome.

A squirrel raced along the bank towards him. Stopping suddenly it ripped off in the opposite direction. But James wouldn’t hurt it. In fact, the boy was the one who was nervous. "From his shadow," school chums said. He was a bluffer and his noisy façade simply masked the feelings of dad leaving him so suddenly.

James was fearful of swimming in water over his head, yet felt comfortable by this river. He was also nervous about climbing any high places, such as hiking in the wild woods. It was something dad could not understand. Maybe it was James’s dreams about monsters chasing him through the forest.

Then how come he's here, able to handle his emotions? Mom must have told Mr. Carpen. . . about his fears. Is that why his neighbor brought him to this remote place? All his thinking caused the boy to be sleepy. He laid his head on the nearest soft rock, and closed his eyes. Ah, just for a moment.

Sunshine was soothing and the scent of wild roses bathed the sleeping child. James dreamed mom was giving him a goodnight kiss. James thought about dad. He missed him so much. If only he were here. It wasn't fair he had to die.

Time seemed to stand still as images and memories danced in his mind. Suddenly, James opened his eyes. Where was he? James felt so rested. As his eyes began to focus he saw a man coming towards him. He recognized the glasses and floppy hat. It was Mr. Carpen. . .

I think so," the boy answered, moving the fingers from his left hand. It had fallen asleep after being used as a pillow.

"Let me help you up" and James accepted the firm grip.

"Want to try some exploring?" the man asked.

Both sloshed in their sneakers along the river’s edge. James couldn't believe how 'cool' this was. And the bug juice Mr. Carpen. . . gave him actually kept the little vampires away. "This is neat" James said.

"Lots more to come," the man added. They rested on a fallen tree aside the shore. James listened intently to the man’s tales of camping and fishing, and other hiking adventures. And how, when the man’s children were young, similar treks had been made here.

The stories sounded similar to today’s adventure. James absorbed tales of animals seen in the forest. James knew they should be respected and protected.

He gasped as a whitetail deer leaped over some driftwood, a short distance away. The animal seemed to float through the air. As the afternoon slowly moved along, James felt relaxed. For some strange reason he didn't feel angry as before. Maybe this was a magic place like Mr. Carpen. . . said. 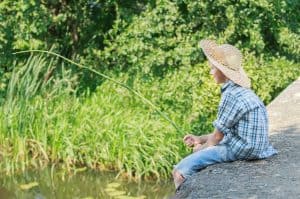 ""Okay if I sit here, a couple of minutes?" James almost pleaded. The man nodded and walked a short distance away, giving the boy some privacy.

James saw how easily the man cast his fishing line out. Must have had lots of practice he thought. James wondered if he could ever be like Mr. Carpen. . . To have fun, not worry so much especially not always expecting to get A's in school. And not having to be the fastest runner on the block to escape bullies.

James wished he could cast like Mr. Carpen. . . Even learn how to swim. It would be great not to be afraid of everything. Maybe his neighbor might teach him how to be braver?

"HEEYYY, MR. CARPENTIER! Wait for me!" James startled himself as those words roared out of his mouth. It felt good running through the shallow part of the river by himself. Water exploded in all directions as he rushed forward. It didn’t bother him when his jeans got soaked again.

Just before reaching the waiting man, something made him stop and turn. Looking back, he sensed someone watching. Yes, he was sure of it, an outline of a face in the clouds. He knew it was dad. And he was smiling.

There are many children living without one parent and our stories deal with similar issues. Richard is pleased to use his 22 years of social services experiences to write and share ideas.