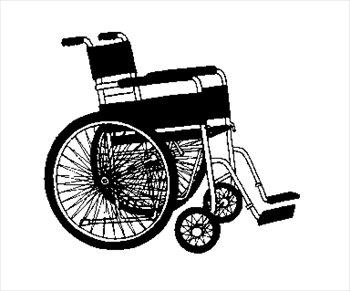 A young boy’s physical limitations do not stop him from overcoming some bullies and winning their friendship.

“Trig, you know what I say. Work now, play later.”

Madge smiled in spite of herself. “Come on, dinner’s ready.”

“Meeting with a new client. He’ll be late.”

There was a knock at the door as they were eating. Madge answered and minutes later called, “Terri, come in here, please.” Looking frightened, Terri stood up from the table and made her way to the living room with Trig following behind. She stutter-stepped when she saw Bill White
standing in the foyer frowning. “Mr. White has a question for you,” Madge told her. Terri’s face went pale.

“My son said you kicked him in the stomach, is that true?”

Terri looked at her mother for help. “Go ahead, Terri, answer Mr. White” Madge trusted her children. If Terri did what she was accused of there must have been a good reason.

Terri started to speak but Trig’s voice was heard first. “It was my fault.” Bill White turned to the frail looking boy sitting beside Terri in the wheelchair.

“Because I couldn’t defend my sister.” Trig answered in a small voice, looking down at his shoes. His shoulders sagged.

“They?” Bill White looked at her, his eyebrows raised.

“Fred and Gregg Morgan. They dumped Trig out of his wheelchair onto the ground,” she said, blinking back tears. “They thought hurting him and getting him all muddy and wet was funny.”

“They wanted to fight and I couldn’t do anything about it,” Trig said, his hands fidgeting in his lap.

“I see,” Bill White said. “I’ll let you folks finish your dinner. I think I may pay you another visit after a while.”

“Thank you for bringing this to my attention,” Madge said. Bill White nodded and left. Back at the table, she asked Terri. “Could you have thought of a better way to handle the situation? Don’t get me wrong. I am proud of you for defending your brother.”
“I know I should have dealt with it differently.” Terri said. She carried her plate and silverware to the sink. “The way they went after Trig, it just they made me so mad. I’ll handle it better next time.”
“Let’s hope there isn’t any next time,” Mage sighed. She filled the sink with hot water and dish soap.
“If there is I’ll take care of them myself,” Trig said, clenching his fists.
“As I said, let’s hope there isn’t a next time,” Marge said.
“Yes, Mother.” Trig always called her Mother when he was frustrated with her.
They had just finished the dishes when the doorbell rang. “You kids put the dishes away while I see who’s at the door,” Madge said, wiping her hands on a dishtowel. A few minutes later she called them into the living room.

“Now what? I hope it’s not Mr. White again,” Trig said, turning his wheelchair toward the living room.

“Me too,” Terri said, quickly putting away the last of the silverware.

As they entered the room they saw Bill White and Fred, standing just inside the front door. Fred was looking at the floor; his mouth was turned down and he looked like he’d been bawling.

“Fred has something he wants to say to both of you.” Mr. White placed his hand on his son’s shoulder. Fred’s mouth moved but nothing came out. “Go ahead, son.” Bill White urged.

“I…”Fred started his eyes still on the floor. He uttered a little grunt when his father squeezed his shoulder, not so hard as to hurt him, just enough to let him what was expected of him. “Remember what we talked about,” Bill White said softly. “Look them in the eyes.”

“I...I’m so…sorry. I really didn’t mean to hurt you.” Filled with tears and misery, Fred’s eyes darted around the room, finally landing on Trig.

All the fight went out of Trig. “It’s all right. You didn’t. The two boys exchanged conciliatory looks. The tension that had filled the room evaporated.
Terri’s voice was barely audible. “And I’m sorry I kicked you, Fred.” She stepped forward and held out her hand. Hesitantly, Fred reached out his hand to grip hers. Rolling forward, Trig grasped Fred’s other hand. For a moment no one spoke.
“Son, wait for me outside,” Mr. White said quietly.
“Yes, sir. Sorry. That will never happen again,” Fred said, then turned and walked out the door.
Bill White turned back to Trig, Terri and Madge. Lines creased his face. He sighed. “Fred has had a lot of problems since his mother died last year. He blames God for her dying and he’s been acting out. He started running around with Gregg a few weeks ago and I’m afraid one of these days I’m going to get a call from the police.” Mr. White exhaled heavily and wiped his cheek. “Well, I’ve taken enough of your time tonight. Thank you for understanding.” He turned to go.
“We’ll be praying for you and Fred,” Madge said.
Bill White nodded. “Thank you.” At the end of the walkway he put his hand around his son’s shoulder. Together they crossed the street and walked home.
Chad Nelson arrived home exhausted from the day’s business. His client had showed up an hour late for his appointment and made Chad answer all his questions twice. He came in as Trig and Terri were getting ready for bed. He spent a few minutes with each of his children and prayed
with them. Lying in bed listening to the low rumble of his parents’ conversation, Trig couldn’t make out their words but knew they were discussing the afternoon’s incident. The lull of their voices was making him sleepy. He turned on his side, closed his eyes and wondered what it would be like not to have a mother.
“I wish I could shield him from the hard side of life,” Chad said as he sat on the couch rubbing his eyes. “But I can’t.”
Madge’s crochet needles clicked as she worked on what would be a blanket for a family with a new baby at church. “I know. He has to face the bullies of the world and overcome them with the love of Christ.”
“Yes, and it’s not going to be a picnic for him. You know, this new client John Macklin was annoyed when I said I had get home before my children went to asleep.” Chad poured more cola into his glass. “He walked out in a huff. I think I lost the contract.”
Madge put down her handiwork and looked at her husband in disbelief. “Oh, honey I’m so sorry! After all the time you spent with him.”
Chad drained his glass. “Well, maybe he’ll find somebody who’ll be more accommodating. But it will be at a higher price than I’m willing to pay.” He yawned. “I’m going to bed, hon. I’ll meet you in there.”
“I’ll be there as soon as I finish this row.”
As in every household, school and workday mornings were a flurry of activity. Yet in the Nelson house there was order, that is, as much as possible. Chad and Madge insisted the family sit down together for breakfast, even if for only ten minutes. After their father said grace, Trig and Terri could eat while he read from a daily devotional.
This morning just before the children left for school, Chad, still sitting at the kitchen table, took Trig aside. “Are you okay for today, son?” Whenever he spoke to Trig or Terri, Chad made every effort to come down to their level. Even when he had to discipline them, he would sit down, tell them what they did wrong and explain what the punishment would be. He also explained that he was implementing the punishment so they would learn from it and live a happy, satisfying life. Afterward he would hug them and tell them how much he loved them. He never held any wrong they did against them or brought up past sins.
Trig grinned. “Yeah Dad. Terri’s going to follow me around all day and if somebody so much as looks cross-eyed at me she’ll beat them up.”

“I’ll be fine,” Trig said. “Gregg’s kind of a coward and after last night Fred won’t bother me.”

Chad tousled his son’s hair, pulled the hood of his jacket over his head and said, “Okay, buddy, your mom and I will be praying for you.”