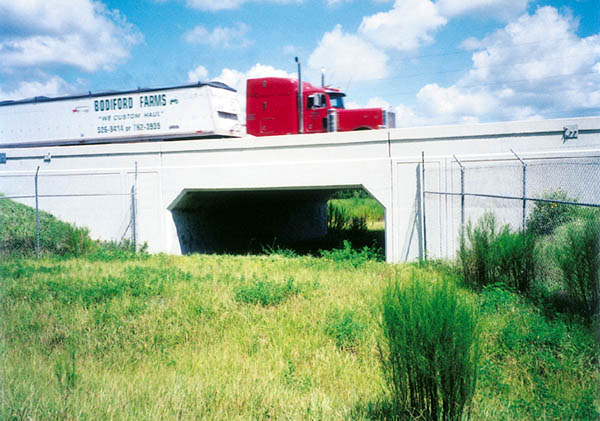 Macklewood is a small village. There is church, a grocery and a bakery. Next to the town-hall there is a pub. Just outside the village is a big forest.
This forest is the home of all kinds of animals: foxes, rabbits, deer, frogs, butterflies, birds, bees, … Do you know other animals that live in a forest?
One day huge machines and trucks drove through the village. In no time the beautiful forest was cut into two halves by a new highway. It did not take long before hundreds of cars, vans and other vehicles were driving over the highway.
Luckily, for the inhabitants of Macklewood a bridge was built over the road, so they could still walk or drive from one side of the forest to the other side.
But for all the animals it was not funny. Some brave ones dared to cross the road by running fast. A lot of them can see in the dark, so they did it mostly by night when there was less traffic.
Unfortunately more and more got killed. From above the bridge, the people of Macklewood regretfully saw the dead bodies of the animals laying on the road.
Something had to be done about this. So they went to the mayor to discuss a plan. They would ask the Minister of traffic to build an ecotunnel. They read about it in the newspaper. It is like an enormous drill that makes a huge hole under the roadway. Through the hole they put a tube through which the animals can run back and forth. The Minister agreed and after a while the giant pipe was ready.
For the official opening, the local brass band with the mayor in front marched to the tunnel, followed by almost all the inhabitants of the village. Afterwards there was a big party.
The animals did not know what happened, all this noise in their usually quiet wood. They were hiding behind trees and watched curiously and anxiously from behind the bushes.
When the party was finally over, some brave animals dared to go and have a look at this weird hole under the road. They quickly understood that they could easily run from one side of the wood to the other side.
On their turn, the animals organised a big party. From now on they could safely pass the tunnel and they did not have to mourn their friends anymore that were hit by the cars.
The birds, the butterflies and the bees did not understand what this partying was all about.
Of course, they do not need an ecotunnel because they have wings and they can fly over the highway.

Are you sure you want to report this content as inappropriate?
Report