The Peacock And The Crow 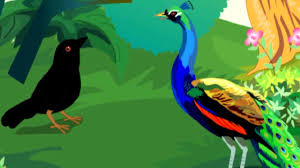 Juni peacock and Ken crow were the best of friends. While everyone admired the beautiful peacock they hated the crow with its black body and coarse voice with which it kept cawing. ‘’ What an ugly bird,” the other animals would say every time they cited the crow. However since the peacock refused to attend any parties or shows without the crow, the other animals were forced to tolerate Ken on every occasion much to their dislike. At parties Juni would spread out her wings and dance to the delight of the guests, in fact it was a spectacular sight to watch the peacock dance, so no one wanted to miss an opportunity of inviting Juni.

One day it was Teddy bear’s birthday, “Juni I have one request to make please do not bring Ken; my aunt from Black forest is coming for the party and she hates crows.”  The bear implored the peacock.  Juni wouldn’t listen, but Ken reasoned with her. “I will sit on a nearby tree and watch you dance and after the party is over I will accompany you back home, as it is you know I hate parties.”  After much persuasion Juni agreed as she loved Teddy and did not want to hurt him by not attending his party.

It was evening and everyone was having a great time at Teddy’s party when suddenly a cat landed in their midst with a dead rat in its mouth.  Everyone screamed in horror.  Frightened the cat fled leaving the rat.  The whole place started reeking; the object had to be removed, but who was going to do it? Bunny rabbit, Dina kangaroo and Daisy deer decided to leave the party as they could not bear the stink.  Watching the scene from top of a tree and seeing how disturbed the guests were Ken flew down from the tree top picked up the rat in its beak and flew away.  He put the rat under a rock to eat later on and then flew back to the tree where he had been sitting.

Everyone applauded Ken and he was invited to join the party and treated like a VIP.  The animals realized that crows were not only black birds that made cawing sounds but they had a part to play in keeping the surroundings clean.  By eating dead and rotten items Ken like other crows cleared the atmosphere and made it livable for others.