The Legend of the Black Sea 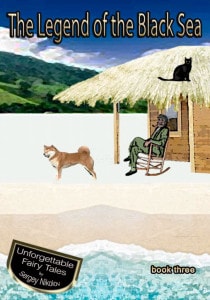 There once lived an old man on the shore of a beautiful sea. All day he wove nets and caught fish. There were so many that the old fisherman shared them with his animals. He had a nice dog and an evil black cat. The dog was called Boley and the cat was called Serzhina.

“Boley!” shouted the old man to his dog and it came at once.

“Boley, bring me some water because I’m thirsty!” The dog dashed away and in a little while came back with the water.

“Here’s a fish for you,” the old man said as he stroked him.

“Serzhina!”shouted the old fisherman to his cat this time, but Serzhina didn’t appear.

As soon as the old man said these words, the cat jumped from the roof and mewled around
his legs with a phony purr.

“Here is your fish. Now bring me my hat, because I’m getting hot.”

The cat took the fish and then jumped on the hat rack and brought the old fisherman the hat.

“Don’t say that!” the old man scolded him.

The next day the old fisherman got sick. He had a high temperature and couldn’t get out of bed.

“Boley, bring me a pill from the shelf,” he said.

The dog tried to jump on the cabinet where the pills were, but he couldn’t reach it.

“Serzhina!”called the old man, but the cat didn’t appear.

As soon as the old man said these words, the cat jumped from the roof and mewled, “Meow, meow…I want a fish.”

“Serzhina, I can’t go fishing today because I’m sick. When I get better, there’ll be enough for everyone. Hurry, Serzhina, bring me the pill from the shelf.”

The cat jumped on the shelf, but instead of bringing the pill to the old man she purred again, “I want a fish. Meow, meow…”

“Serzhina, please, bring me the pill; otherwise, I won’t be able to get up,” sadly repeated the old man, but the cat didn’t budge. The poor old man didn’t know what to do and began to cry from anguish.

All at once the dog yelped, “Woof, woof, woof…”

The old man turned toward Boley and saw a pill on the ground, “For sure it accidentally fell,” he thought to himself and looked toward the shelf where Serzhina was.

The dog brought the pill to the old fisherman and a little while later his temperature began to fall. When the old man woke up the next morning, he was healthy again. He impatiently threw the net into the sea and caught a lot of fish. He sat down on his chair in front of the house and watched the waves with his pipe in his hand.

“Master, this cat will be our undoing! Let’s drive her away! Black cat, evil cat!” yelped the dog.

“May it never be! You’ll see that Serzhina will change and will become good.”

“Master, do you remember that you said the same thing about her mother. That cursed black Isolda, who tore up your nets every night while she was alive?”

“Boley, we have to believe in the power of good. You’ll see. One day Serzhina will change and will become good.

The old fisherman drew on his pipe and became lost in thought but not for long because the dog again said, “Master, aren’t we going to have breakfast?”

“Woof, woof!” barked the dog with his tongue lolling out. The old man threw him a few large mackerels and patted him on the neck.

Just then the hungry Serzhina jumped off the roof. “Meow, meow, I want a fish.”

The old man threw her a fish and then said, “Please, Serzhina, don’t act that way again.”

The cat purred and continued to rub against the old fisherman’s hand while he slept peacefully on the chair.

Unfortunately, when he woke up, the old man saw that the thatched roof of his house was burning.

“Boley, Serzhina, help me! Bring water from the sea! Hurry!” The dog dashed off, but the cat didn’t budge. The old man threw her a fish and she ran to the water, but after a while she fell asleep. The old fisherman threw another fish to the black cat, and once again she began to help put out the fire but only for a short while. A little later the fish ran out and Serzhina went to sleep again. The dog kept on until he was exhausted, but the fire covered the whole house.

The poor old man wept because he had been left without a home.

“Enough! I can’t take any more! Black cat, evil cat!” he raged. Then he grabbed Serzhina and angrily threw her into the sea.

Finally, the old man had escaped from the black cat; however, the sea grew black.

A few minutes later, a small black kitten with a crooked tail turned up beside the burned cottage.

“Shoo! Shoo! Get away from here! No more black cats!” angrily said the old fisherman and chased the kitten away.

“Master, I hope, that you finally have some sense in your head,” yelped Boley.

“Boley, should we hurry up and build the house anew? What do you say?” enthusiastically suggested the old man.

“But the fish are all gone.” The old man scratched his head.

“So let’s go fishing then!” suggested the dog. “Okay, Boley, bring the net!”

Unfortunately however, when the old man threw the net into the black sea, he only caught a few small mackerels. The following day the same thing happened again only it was even worse. So day after day, the fish got less and less and the old man and the dog got hungrier and hungrier and the sea remained black.

One morning the poor old man refused to throw out the net, since for the past few days it had always been empty. He had become so desperate and weak from the scarce bits of food that he fell to his knees in the sand with hands out-stretched toward the sea, “Why!?”

“Because you lost your faith in goodness!” answered a herring-gull as it landed on the wood of the burned-out house.

“But there was no good in Serzhina!”

“There is good and bad in everyone, but it depends on you which you will believe!”

“It was her fault that my house burned,” complained the old man.

“Yes, but before that she saved your life!”

“Fisherman, are you sure that that pill accidentally fell off the shelf?”

The old man began to think it over, but the gull continued, “As I said, it entirely depends on you, whether you will believe in the good or the bad.”
Not long after that, the old fisherman heard the loud bark of Boley. When he turned around, he again caught sight of the little black kitten with the crooked tail. The poor little thing was curled into a ball and was not brave enough to move, since Boley wouldn’t quit barking at it.

The old man approached and Boley yelped, “It wanted to steal our last piece of fish!”

“No, Boley, it’s simply hungry like us. See how small and skinny it is.”

Even though the dog continued to growl at the kitten, the old man divided the last fish into
three pieces.
“Here, Boley, this is for you. This is for me and that is for you, little one.”

The old fisherman gave the meat to the black kitten and started to pet it. Immediately the kitten became agitated and scratched him with its sharp claws.

“Don’t say that!” the old man scolded him. “It’s just scared because it doesn’t know us.”

The three of them ate the fish and watched the sea, but after a while the old fisherman again sadly said, “We don’t have anything else to eat. Now we’ll die from hunger.”

The dog whimpered sadly, but the little black kitten jumped up onto the burned roof. Just then the herring-gull said, “Throw the net into the sea!”

“But it is black and there are no fish!” answered the old man.

Since the bird didn’t say anything else, the old man decided to try. He threw the net into the sea and when he pulled it out, it was full to the top.

All of them were very happy and right before the gull flew away, it said, “Fisherman, remember one thing! A person without faith is like a net without fish! Once again you believe in goodness and once again your net is full!”

During the following days with fresh energy from the plentiful food, the old fisherman rebuilt the cottage. He lived for a long time after that, but he never again lost his faith in goodness even though the sea remained black.