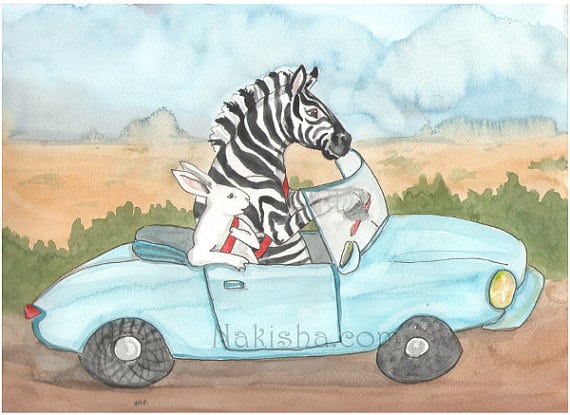 It was Bunny rabbit’s birthday but since she was new to the Evergreen forest she had no one to celebrate her birthday with as she did not have any friends. Bunny had migrated from Black forest to the Evergreen forest after she had lost her parents and siblings in a landslide. Her life had been saved since she had been out visiting her friend at the other end of the forest.
It was almost noon and Bunny was walking alone in the forest when her alert ears picked up a sound of an impending danger she could have leaped away to safety herself but she thumped the ground as a warning to others. Dina the zebra dozing under a tree heard the sound got up and fled to safety.

It was only after sometime that Dina realized that a rabbit had actually warned and saved her from the jaws of Rusk the lion that she sought Bunny out and befriended her.“Can I take you for a ride in my car?” Dina asked. “I bought one recently.”
Bunny was thrilled she had never ridden in a car before. It was in the car that Bunny and Dina shared jokes and thoughts and grew closer to one another Dina wished Bunny after coming to know that it was the latter’s birthday that day.
The car passed through desert land hills and plantations. Bunny noticed a crate in the car. “ There is a cave at the end of the road that we are taking, my friend Simi the bear lives there if we can collect some mushrooms in the crate Simi will whip up a grand meal for us “.

The car soon entered the forest again and it was while driving through the forest that the friends saw a mother rabbit with a basket and two children in tow moving through the forest. It was mother rabbit Julie and her children.
“Hello Julie where are you going?” Dina stopped the car.“To the apple orchard for apples, there will be no food for my children until the apples are handed over to Aunt Matilda.” Julie said.

Dina nodded ever since Julie’s husband went missing she was staying with her uncle Jeff who loved her and his wife Matilda who was terribly strict as far as duties were concerned. Apart from the household chores Julie helped her aunt with the jam making business too.‘’ Hop in “, Dina said. Though there was not much space in the car Julie squeezed in between Dina and Bunny, the two little bunnies sat on the bonnet of the car holding on to the windscreen wipers. Dina drove very slowly.

Very soon the car reached that part of the forest where there were a number of apple trees. Julie and her bunnies got busy plucking the apples. Watching them Bunny was reminded of the days when she along with her siblings and parents had travelled for days in search of herbs to make medicine as her father was a doctor.“How are you going to return home with the heavy apple basket?” Bunny asked.“Uncle Jeff will be passing by soon in his truck. He is a florist and sells flowers in the market.” Julie said. “He will take us home.”Dina and Bunny decided to move on. Julie thanked them.

Dina and Bunny did find mushrooms but saw Ami and Bimbo sitting on them and having tea. The rats did offer the two friends tea but would not part with the mushrooms which they had grown themselves. It was only after Dina informed them that it was Bunny’s birthday and they could join them for dinner at Simi the bear’s cave that Ami and Bimbo helped Dina collect mushrooms in the crate. A surprise visitor was Uncle Jeff at Simi’s cave Julie had sent a bottle of jam for Bunny Dina had informed her it was Bunny’s birthday. At the cave Bunny saw Simi limping having hurt her leg due to a fall.
She decided to put the knowledge of herbs she had gathered from her father to test made a paste of the right herbs and put the mixture on Simi’s leg.

Slowly the pain started to ebb. “She will be fine soon,” Bunny said. Feeling much better Simi made a great meal of mushrooms and peas, while Bunny was busy mixing herbs Dina went and bought a cake from Jumbo elephant’s bakery nearby. Bunny cut her cake she was overwhelmed as she remembered her family but one had to accept life as it came.Soon it was time to leave Bunny thanked everyone what a wonderful day it had been she had made new friends celebrated her birthday and above all she was never going to be alone again.