The Crossbow of the Wizard 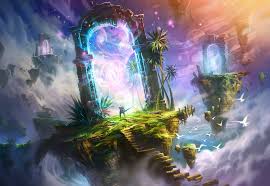 My name is Corrin, the warrior/hero of my nation (who has a small fear of eggs!).  I was hanging out in my penthouse in the castle when Sizzly the Wizard burst in crying out “Ragnarok used the Dread Spell!  It will eventually reach us and cause all life to wilt!” “Dread Spell? Ragnarok? Wait, what!?” I said.

So many questions raced through my head. “Wasn’t Ragnarok the Unholy exiled to Skull Island because his dark thoughts grew beyond the king’s control?” I asked.  “Weeeeeelllll, kinda sorta maybe the spell wasn’t strong enough.” “Woooo Hoooo! Something to do. Finally!” I cried.

I jumped out the window and through the roof of my companion Bumblebear’s house. “It’s adventure time!!” I yelled. I leaped on his back and we bolted into the distance. From behind I heard Sizzly yelling “Oh man, more property damage?”  “Hyah!  To the princess’s tower!” I told Bumblebear.

We got to the foot of the tower when I did a double backflip off of him and landed with a thump.  I strolled in casually when I noticed the empty seat and realised that she was missing.  “I told Sizzly to inform you that she was missing.” The king said. “Oh, I always leave too early to hear the details.  I’ll be back with your daughter!” I yelled back to the king and queen as I ran down the hall to Bumblebear.

We ran into town to question some people who have a history of dealing with Ragnarok but a lot of the villagers are good people that stay away from evil wizards like him.  The first person we questioned was the local blacksmith Malcumus.  “Where were you at 21:00 today?”  I asked him.   He replied saying “Just finishing up on new Electranium sword and shield sets for the elite forces to pick up today.  Why?”  “That information is classified. Thanks!” I said and we walked away.

“There’s really no one else to question,” I said to Bumblebear.  He growled in despair. “Don’t worry!” I assured him. “We’ll find Princess Lucina!  We always do!”  “Wait!!!” We hear a voice.  Malcumus comes running towards us. “I forgot to give you your own Electranium sword and shield.” he said.  “It can harness the power of electricity and transform into a endless ball of pure energy.  I’ll give you another one so that Bumblebear’s stinger can absorb it and shoot it.”  “Thanks!” I said, and we headed to inspect the defense system.

There must have been something wrong with it because Ragnarok never would have been able to sneak past it. It was completely disabled. I saw a sort of magic texture dancing around the broken pieces of machinery. There were cogs and stone bricks everywhere and every pile of wreckage had the magic texture to it.  “These lives must be avenged,” I said to Bumblebear.  He roared in anger and guilt.

Our final stop before leaving in our Electranium boat was the Godess statue.  A lot of warriors went to the Godess statue to pray for strength.  We arrived at the statue and I prayed for my strengh.  Also if you are wondering why our nation, Gokusaiyan has so much Electranium, I’ll tell you.  Thousands and thousands of years ago, while the great war of Chaetophere, an electrified meteor crashed into a deserted island.  The power of the meteorite grew into the Evertree, a mythical tree capable of growing pure Electranium from the branches. The tree is guarded by little mushroom warriors with spears and toxic fungus bombs but we have befriended them so we can take as much Electranium as we need for our survival needs and weapons.  Because they were the first life to walk among it, they had naming rights.  By its inhabitants, it has been named Nidavellir.

We set out for the harbor.  The harbor is just behind the stronghold.  Most of the boats are either for the fleet or the property of the royal family.  Obviously, I am part of the fleet so I’ve got my own boat.  It is big enough for Bumblebear to lay down and I sit on top of him.  He is actually very comfy and soft.  We sail down to Nidavellir to see what’s been happening.  As soon as we get there, we are ambushed.  I realise the mushroomy guys have been brainwashed by Ragnarok.  They are usually very friendly.  “Looks like a fight sequence is coming up!” I said to Bumblebear.

He growled excitedly.  BASH! CLANG! BOOM! CLATTER! SMASH! FIGHT! K.O We knocked some sense into their tiny little poison heads!  Also they have a deadly spore in their round thingies on their heads.  They start to wake up and rub their spores.  “Shhhhrrrrriiiiieeeeeeekkkkk” they shrieked in pain.  “Sorry everyone!  You were brainwashed!” “Yeeeeeeeeee!”  That is the official language of the combined Mushroom Person Species.

Also on our island, Mushroom Soup is a banned meal.  We have too close of a relationship with them.

One of them pulled out a small piece of metal.  “It’s called an Aetherstone.” he said.  An alert came up on it.  It was from Ragnarok . He said he had a pleasant surprise for me involving his wife, the evil queen Bayonetta.  I was not convinced.

They gave me the Aetherstone and some electrical bomb arrows.  I turn it on to see what it does.  Suddenly a red substance came out of it and morphed into a ball.  The mushrooms tell me this is part of the Aether inside it.

I thank them for their help and I go back to my boat.  We head off towards the misty, dark abyss that seems to be inhaling the light.  There are giant floating hands guarding the entrance to the vortex.  The vortex leads to Ragnarok’s wizard/witch evil super castle that has tons of warlords and warlocks who work for him surrounding it.  Suddenly a skeleton with a blue jacket dropped into the boat out of a tree.  “Hey guys!!!!!” the skeleton said.  It said something about how much it dislikes Ragnarok and Bayonetta and something about that he was proud his army was expendable and it wanted to help me seal the darkness and stop him.

“What’s your name” I finally asked it. “Sans, but why are you asking?”  “Because you are now an official member of the Apex Primitives!”  I said to it.  “Also, do you have an official gender?”  “Of course! I’m a male, obviously!”  “Yeah, thought so!”

We continue to sail towards the inky abyss.  Suddenly an army of mega hands surround us.  “We’re under attack!!!!” I screamed.  Some dark lightning came crashing down and obliterated the hands.  “Huh, how convenient!” said Sans. “But still, I could have done it myself!  I have power over time and space!”

A dark yellow passage opened and inhaled us.  Surrounding us was just chaos and wreckage.  I shuddered at the fact of coming back here again.  “LOOOOOOOOOK OOOOOOOOUUUUUUUTTTTT!!” screamed Sans.  It was Rixium, ruler of the Dream Dimension and one of Ragnarok’s old Villain Bar friends.  A cloud of Dreamy Dust exploded into the air.  Bumblebear roared the Roar of the Ancients and blasted the Dreamy Dust straight at Rixium.  He was snoring in no time flat.  “I didn’t think Dreamy Dust could work on Rixium himself.” I said. “At least the world is working in our favor, this time around!” Sans said.

He pulled out a grappling hook and tornado spinned us up to the tallest spire of the castle but we all fell off and went through the roof and into Ragnarok’s bedroom into his pool of sheets and pillows that he sleeps in. “OOOOOOOOOOOOOOOOOOOOOOOOFFFFFFFFFF!!!!!!” we said.  “How is the world working so much in our favor today?!?” said Sans.

TTTTHHHHUUUUMMMMPPPP!!!! (it’s capitalized because it’s loud) “ WAAAAAAAAAAAAHHHHHH!!!” Sans screamed.  PPPPEEEEEEWWWWWWW PPPPPPEEEEEEEWWWW went my electrical bomb arrows against a mystery figure.  IT WAS A DUMMY!!!  A flash and a kazipp were heard and in came Ragnarok with his wife but they were fused into a demo-bokoblin.  “Look who’s here!”  I said.  I got a growl in return.  It seems this demo form has made Ragnarok lose his intelligence. “No matter! I’ll take you on anytime!” I yelled, swishing my sword.

AAAAAARRRRRRRGGGGGGGHHHHHHH!!!!!  It poofed away back into Ragnarok but we had rid the world of the Lady of Destruction.  Now we have to deal with the Lord of the Dark Dimension.  “NOOOOOOOO!” he cried. “YOUUU!!” he said, pointing at Sans. “FIGHT ME TO PROVE YOUR WORTH!!” “Nah, I’m fine!” said Sans. “I’d rather have a dance-off!  Wanna try and best me?” “ NOOOOO!!  LOCK ME AWAY!!  I WILL NEVER DANCE!!” screamed Ragnarok.

“Actually we had something better for you! HOCUS POCUS!!!”  I said.  And he was banished.  The princess mystically flashed in after the banishing.  “Hello, friends!  Let’s go home!” said Princess Lucina.  There was a flash and a chiming sound and we were standing at the foot of the princess’s tower.  “Wait!  Couldn’t you have done that to get us there?!?” I said. “The tower weakened my magic abilities so I could not mind travel you to my destination.” said the princess.

“Oh well!  At least we had a fun adventure!”  Everybody laughed and cheered knowing the princess was safe again. And no other threat came across Gokusaiyan for years.  Until December 31 106…