The Changing World of the Forest Goddess

The Changing World of the Forest Goddess

Hannah walked alone through the woods and felt wistful. She was nine years old but had already seen many changes in her short life. They weren’t all bad things. Some were pretty wonderful. Hannah loved having a new little brother and her stepmother was just lovely. She worried a bit about moving to a new house but was sure it would eventually feel like home. Hannah had to start at another school but she’d always been able to make friends before so wasn’t too anxious about it. Sometimes though, her secret self wished that things didn’t have to change at all.
“Why can’t things stay the same?” she wondered, “Why do people have to leave, families move, and little girls grow up? These thoughts made her feel worried and even a little sad.
Hannah kicked a stone on the path and it hit a huge oak tree set back far in the shadows. She took a few steps nearer to the tree and paused for a moment. There wasn’t any breeze but the tree seemed to be swaying. Hannah rubbed her eyes and looked again. The tree definitely was moving. Its big branches were reaching out to her and getting closer, as she stood still and was entranced by the magic. Soon, she was encircled by branches, twigs, and leaves. As Hannah was pressed deeper into tree’s embrace, she became one with the tree. Hannah’s brown hair grew longer and longer, as it curled and wrapped around the leaves. Her body grew lean and strong and it merged with the bark until they shared one trunk. Her arms and legs stretched out further and higher, entwining themselves with the wooden limbs until she and the tree moved together. Hannah’s gentle spirit softly settled into its new home and she became a forest goddess.
Hannah was now part of the woodland and it was beautiful. As a goddess she knew the friendship of the forest creatures. Chirping birds flew to her and nested in her limbs, squirrels ran over her branches while gathering their nuts, bears brushed their furry backs against her bark, and bunnies cuddled close to her trunk. 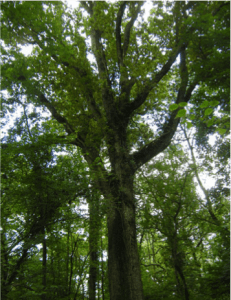 Hannah learned a new appreciation for the different seasons because their changes brought wonder and warmth to the heart of the old oak. Winter was a quiet and peaceful time and without leaves, her thoughts were clear and her body was cool. The sparkling white of winter led to the softening spring. In the springtime, she breathed in deeply the rich smell of the soil and marveled at the green new life born to the forest. Spring gave way to the sunny happiness of summer where fat bees buzzed over fragrant flowers and she took long naps in her toasty bark. Hannah’s favorite season of all was autumn, when she felt her most glorious. Her leaves became magnificent colors and she loved to watch the wind lead them in a delightful dance.

Hannah the forest goddess observed how things didn’t stay the same in nature’s world. She saw young animals born to their mothers and the spirit of old creatures pass on. When faced with the cycle of life in her woodland home it brought her both joy and peace.
Within the tree, Hannah spent hours watching the clouds move across the sky. Sometimes they were fluffy and fair, while others looked heavy and gray before they sent a drink of rain to the ground below. In the evening, she watched the stars twinkle against the night sky and was soothed to sleep by the music of the woodland.
As part of the forest, Hannah came to love the changing world around her. Then one day, she felt herself moving within the tree. Hannah’s arms and legs were shrinking and her body broke free of bark. She shook her hair loose from the leaves and her spirit found itself once again in her own body. Hannah looked up at the tree in wonder. She leaned her cheek against the bark and gave thanks for their time together.
As Hannah walked back down the path towards her home, she thought about the many things that would happen in her life. Instead of worrying about them, she now welcomed the changes with both the wisdom of an old tree and the bravery of a young girl. Hannah knew that in an ever-changing world, she would be happy for in her heart she would forever be a forest goddess.