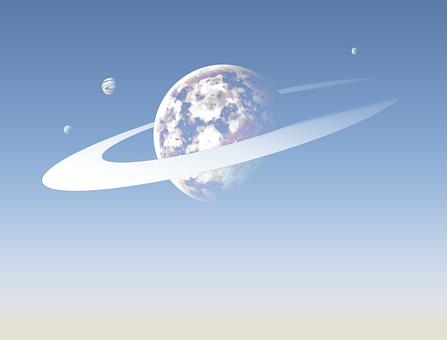 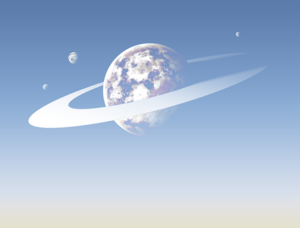 “Why are you hiding? Are you afraid of something?”
“No, on Krubbo there is nothing to be afraid of. I’m just playing a game. The smukdra is ideal to disappear, yet it looks like being totally transparent.”
“Come from behind that screen, I rather talk to a visible person.”

That smukdra-thing is very amusing, when you stand behind it you are completely invisible. Astriebo is convinced that it comes from another planet, but he does not know which one. There is enough choice though. Except for the small blue one, which is the furthest away, there is the red or the milky white one. In total there are about twenty colossuses in space that we call planets, just like Krubbo. The elder Krubbonians claim that our light-years old origin is to be found on that tiny blue ball.

“Towards how many of the planets you think we can travel, Astriebo?”
“I have no idea but I’d like to go on a holiday with you to Waldbrow, the green one.”
“We can do that with the Holostar, which has a connection with five planets. The others are too far away.”
“Zdragjebo, you are so smart. If you were to give a lecture at school about a stranger that visits our planet, what would you tell him?”
“I would start off with Nus, the big fireball that brings light to Krubbo and that keeps it warm. Then, I would talk about our way of living in round metallic spheres that are divided in a kind of honeycomb. Each inhabitant has his own small space in which he sleeps and eats. From a tab that is connected to a general pipe system, we get our daily food in the form of a powerful brew. In a space in the middle of the sphere, people can get together to talk or play games.“
“What is your favorite game, Zdragjebo?”
“Hmm, that is Ludo, but I would also tell the visitor that there are bigger spheres for schools or halls for all kinds of events.”
“Will you tell him about Oerkabbo, the huge plain, where we often play and where things fall out of the sky?”
“I think we better keep that a secret, you never know what a stranger has in mind. The day before yesterday, my brother has found a red piece of metal with the inscription ’Tesla Roadster’. He will bring it to the museum.”
“You mean the place where they show this golden disc with the weird noises?”
“Exactly, they say that some of the noises are creatures that talk.”
“Is there something on that chatterbox that we, Krubbonians understand?”
“There are two small parts that we all clearly understand. One says: ‘Hello from the children of planet Earth’ and the second one says: ‘Good health to you now and forever.'