The Tale of Two Sisters

The Tale of Two Sisters

One day the king decided, to divide the kingdom in two equal halves for his daughters. The king asked Daisy, “Daisy, what is it that you like the most in the whole world?” Daisy thought if she uttered pearls or jewels, her father might be displeased and give the whole kingdom to Rosie. Instead she lied, “Daddy, of course it is you!” When it was Rosie’s turn, she smiled and said, “Oh! Daddy, there are millions of things that I like. But the best ones are the rain, rainbow, smiling babies, helping other people and seeing people smiling.” The king’s face turned red with anger. He punished Rosie by asking her to leave the kingdom for a week.

Rosie left the castle really sad. She started walking out when she heard someone sobbing. It was a coconut tree. Rosie inquired the reason for the sobbing. The tree answered that none of them had watered it in a few days and hence it may die. Rosie said “Don’t worry, my friend. I will help you.” There was a lake nearby and she dug a narrow canal from the lake to the tree, so that the coconut tree could be watered constantly. The coconut tree was immensely happy and thanked her. Rosie waved the tree and resumed her journey.

She saw a cow and a calf crying. She went near them and calmed them. The calf cried “My mum has not had any hay for many days, if this continues she will not be able to feed me. I will starve to death. Our master is not here. If he had been here he would have fed my mom.” Rosie reassured the calf not to worry. She went in search of hay and grass. She returned with a big bundle of hay. This was more than sufficient till the owner returned. Having been thanked by the mother cow and the calf, Rosie smiled and walked happily ahead.

She heard tiny voices crying and searched for them. It took some time for her to realize that they were coming from down below. It was the cries of ants. She enquired of them. The ants spoke in between cries. They said “There was a heavy downpour and it splashed our anthill.” Rosie felt sad and she came up with an idea. She said “I can go collect some mud and help you build your ant hill in a better area.” Rosie succeeded in the task. The ants jumped in happiness and thanked her.

As she walked farther along, she entered a forest. At a distance she saw a hut. She was so tired of walking and helping others; she wanted to rest and so knocked on the door. An old lady opened the door. Rosie asked her if she could have some food and take rest. In turn she would do all the work in her house. The old woman invited her in. She gave Rosie some food to eat. Rosie did not tell the old woman that she was a princess because she did not want the old lady to treat her like one. Rosie stayed in the hut and did all the work for a week.

Rosie started to walk back towards the castle. She met the ants. They gave her gems and jewels. During her return journey, the cow and calf’s master had returned and gave Rosie milk, sweets and dairy products and the master also asked some people to carry the milk to Rosie’s house.

Rosie reached the castle. She knocked on the door. The king opened the door and was shocked to see a girl. He asked “Who is this?” Rosie was stunned. She replied “Daddy! It is me, Rosie, your daughter.” The king could not believe his eyes. He asked Rosie, “How did you become so pretty and how did your hair grow so long?” Rosie did not know that she was pretty. She went and looked in the mirror. Indeed, she was glowing with beauty. 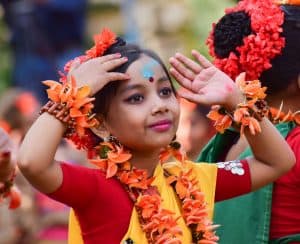 Rosie jumped excitedly and pleaded to her dad, “Let us go to my room and open these gifts.” She was amazed at the jewelry, which was shining like the sun. She took one out and lo! A new one replaced the old.

She turned to the gift from the coconut tree. They looked like normal coconuts, but as she opened them, gold coins poured out. As Rosie kept taking the coins it kept re-filling again and again. Rosie requested her dad to give the jewels and coins to everyone in the kingdom.

Daisy was really jealous. She told her father she was going to study in another kingdom but she had other plans. She went to the place where Rosie went.

She came across the coconut tree. The coconut tree pleaded with Daisy to water it. Daisy arrogantly yelled, “Never! My dress will get dirty if I water you.” Saying this she proceeded farther and encountered the cow and calf who requested her to give them some hay. Daisy quickly replied in a harsh tone “No! If I give you some hay my hands and dress will get dirty.” Saying this, she kicked them and started to walk away. She saw the ants who sought her help to build their ant hill. Daisy answered negatively, again, “No! I am allergic to ants and mud.” She walked away.

She finally reached the old woman’s house. She shouted “Old Lady, I am the princess of a kingdom and I have come to honor you by staying in your house for a week.” The old woman replied, “Please do stay in my house and help me with the cooking and other things.” Daisy was angry and yelled, “No! I am a princess. I am not doing that. You do the cooking and the other chores. I am never going to do such things in a dirty house like this.” The old lady cooked and cleaned.

A week went by. Daisy announced, “I need to bathe before I go back to my kingdom and I need the best soap, shampoo, and a dress with beautiful sequins.” The old woman patiently got her everything she wanted. Daisy asked the old woman to give her gifts more than what she gave Rosie. The old woman gave the gifts. Daisy began to walk away without thanking her.

As she started to walk back to her castle, she met the ants. The army of ants started biting her legs and face. She started swelling everywhere. She ran away. She met the cow and calf who started kicking her the same way that she kicked them. The coconut tree was next. It started to throw coconuts on Daisy’s head. Her head hurt and began to swell with little bumps. She requested, “Please don’t hurt me,” and she ran away.

She was near the castle and could not contain any more suspense and wanted to open her gift. So when she opened it, she was greeted by a swarm of bees and weeds at the bottom. She threw the box away and ran to the castle. She knocked on the castle door and the King came out. Daisy cried “Daddy it is me, Daisy.” The king said, “That can never be! This is not my Daisy. My Daisy has long hair and wears a beautiful dress.” Daisy was astonished by the King’s statement and touched her own head but she was bald. She shouted “No!” 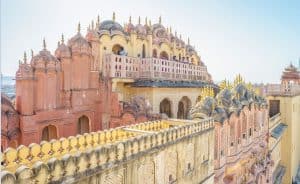 Daisy told the king that she always troubled Rosie and explained to the king in detail about what happened when she went to the old woman’s house and promised her father that she will never hurt anyone and won’t be jealous anymore. She learned her lesson and they lived happily ever after.

Moral of the story: Help Ever, Hurt Never.