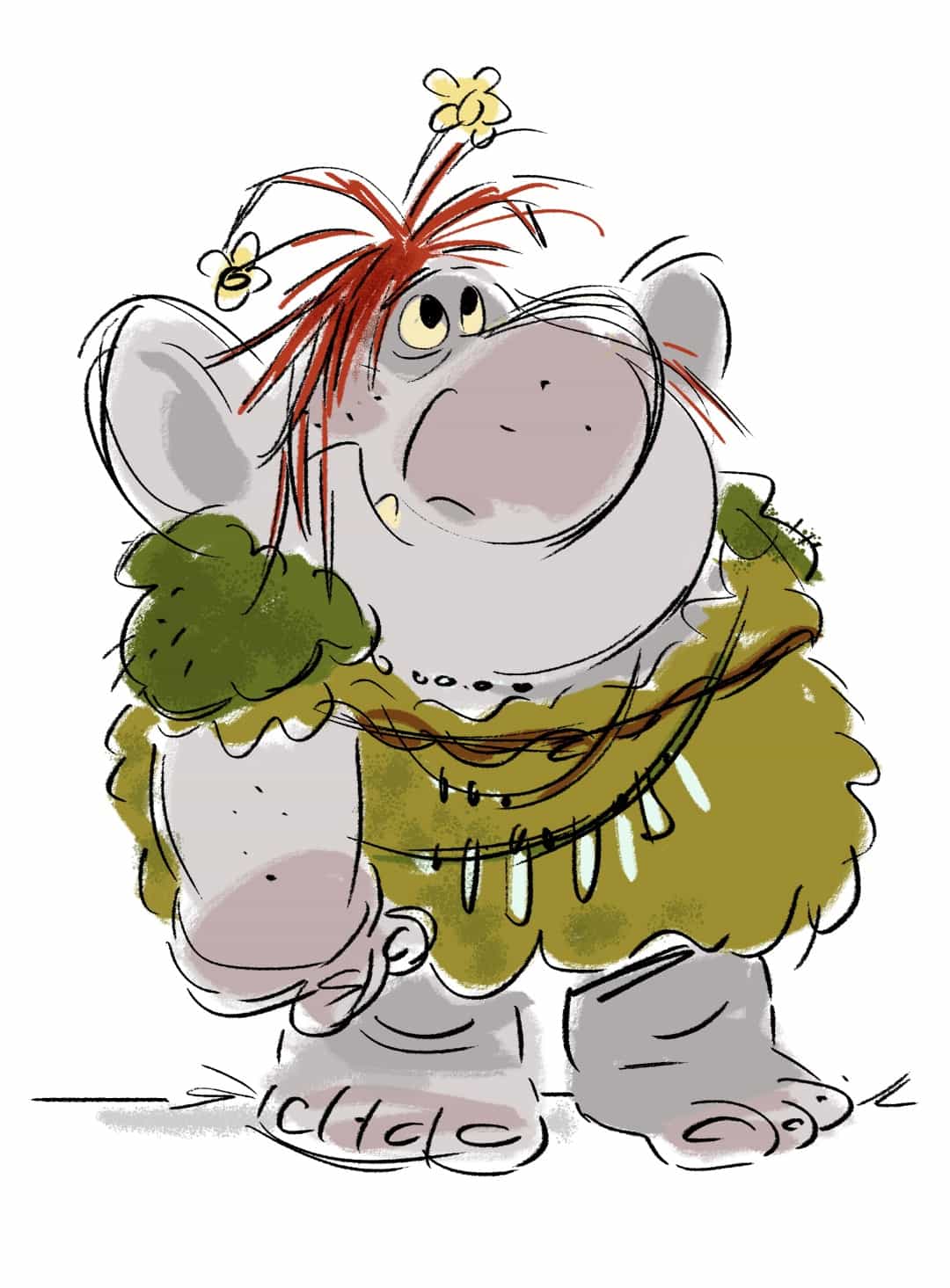 Once upon a time there was a troll that lived up under The Creek Bridge down at Low Hollow creek. He was a short ugly fellow, but very strong. His hair was straight, red, and stuck out like a mop. His skin was really wrinkly and felt like sandpaper. His clothes were always smelly. His name was "Snidely."

One day, Snidely was sleeping and something woke him up.

Someone was coming! It was a young boy and girl in a carriage.

Every time someone tried to cross the bridge, Snidely would jump out in front, cross his arms and demand one Dollar. "You cannot cross my bridge without giving me a Dollar first," said Snidely, with a scowl on his face. If you didn't pay, he would throw you over the side.

The boy and girl in the carriage were so scared they could hardly speak. "Ok, we will pay," said the boy to Snidely.

"We have to get home before the storm," he said to the girl.

Snidely let them through and waved as they got to the other side and rode out of sight. He really wasn't mean, he just wanted to see if people would really pay.

Back under the bridge again, Snidely began to hear some wind and it began to rain. It rained harder and harder. Snidely began to worry as the water started to rise in the creek. He was a strong bully, but he could not swim.

Higher and higher it rose. Snidely began to sweat.

Snidely had to do something quickly or he would be washed down the river.

He got out from under the bridge and went over to the tall fur tree next to the creek. He figured he would climb up high enough that he would not have to worry about the water.

Just as he began to climb, he heard, "Stop, you can't climb this tree without paying me Five Dollars."

It was Chunky the gorilla. Chunky was a nice gorilla, but he was very tired of seeing Snidely causing so much trouble with the people crossing the bridge.

"I only have four dollars," said Snidely.

"I guess you'll have to swim for it then," said Chunky to Snidely.

"I don't know how to swim," said Snidely. "I will surely drown!

"That's a bummer, you should have saved your money" said Chunky.

"I tell you what I'll do" said Chunky. "If you will agree not to charge people for crossing the bridge anymore, I will not only let you climb my tree, but you can come into my house and have dinner with me, as I was just getting ready to sit down and eat."

They sat down, ate dinner, and became very good friends.

From that day forward, Snidely became known as the nice troll that lived under the bridge. Whenever someone came down in the hollow to cross The Creek Bridge, Snidely would walk and talk with the them as they went across. Sometimes he would even sell them drinks and food from the little store he started next to the bridge.

Now people come to The Creek Bridge, whenever they can, to see Snidely. He is actually a real fun guy!

Snidely learned a valuable lesson that he kept for life.

"You should never bully people or act greedily towards others, because you never know when they may be in a position to really offer you a helping hand."