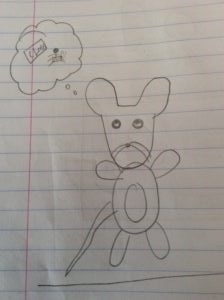 In a faraway land named Bookville there was a library, but it was not a normal library it was a floating library! Many people came to the library on boats and cars. Hundreds of people filled the library everyday. At night a little mouse named Sam came out and took papers from the librarians desk, and took them into his hole. He had written books for his whole life, but he had never shown them to anyone. Sams whole room was filled with books. The only furniture he had was a desk, a chair, a fridge, and a bed.

One day Sam thought he should show his books to everyone. He made up his mind and the next day he put the books in the shelves where they belonged. A few minutes later a child found one of Sams small books. She took the book to the librarians desk and asked her, Who wrote the book? The librarian said, I do not know who wrote this book, but I can hang a poster asking who wrote the books.

Learning: Never be shy and learn to face your fears!