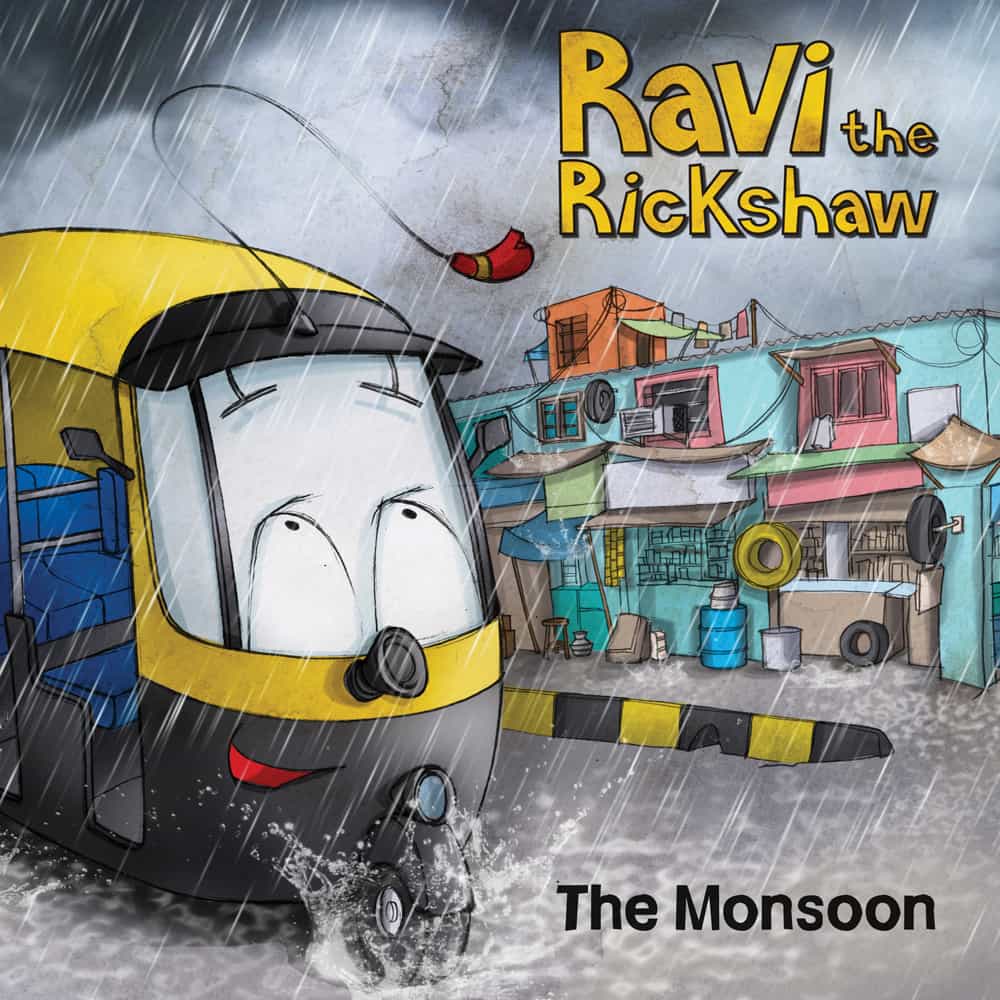 A wise old man is slowly riding his rusty, old-fashioned bicycle into the village square. He has all his worldly goods tied up in bundles of white cloth, attached to the handlebars and even tucked behind the saddle. Babu travels from village to village and he has obviously been here before - the village children are calling out to him:

The children hurriedly gather around kindly old Babu as he slowly gets off his bike and sits down cross-legged on the ground in the village square, getting himself comfortable before starting to tell one of his many stories.

“Well children,” Babu said smiling at all the happy children’s faces staring up at him. “Today I will tell you all about Ravi. The rickshaw. The children clap their hands excitedly.

“Ravi was a brand new rickshaw, all shiny and sparkly.

Ravi was moving in the line of “just finished rickshaws” leaving the factory through a huge factory door, he looks excited, and can’t wait..

He was very proud of himself when he caught sight of his reflection in the factory window for the very first time. His yellow paintwork sparkled in the sunlight, his velvety upholstered seats had never even been sat on and he was especially proud of his matching bouncy red tassels swinging from his handlebars and his aerial.”

Ravi glimpses his reflection in a widow pane by his side, and stops. He thinks he’s beautiful, he smiles proudly, the rickshaw behind him beeps to push him on..

“Ravi was very nervous about what was outside the factory gates, however. It was the first time he had ever been
anywhere on his own and it was very scary for a brand new little rickshaw

Ravi is now by the factory door, he is terrified, he is looking at the crowded streets of Mumbai that he is about to plunge into, and freezes, he didn’t think it would be that scary, the impatient rickshaw behind him is beeping again, but Ravi is holding on to the door

Finally the rickshaw behind Ravi gives him a little push, and Ravi finds himself in the middle of traffic, he collects himself, puffs out the dirt, puts on a very brave and competitive face, and putters along.

Ravi was puttering along up and down various streets,
He gathers a bit of courage and gives a little girl a ride, she gives him a compliment on his new look, he is over the moon now, he starts blowing his horn and singing along waving to people, and other rickshaws are slightly envious of his brand new shiny look.
Ravi is finally happy.
But all of a sudden, he hears a huge BANG. He jolts. Another BANG, Ravi shivers and looks up, the sky has gone black,
The crowds of people seemed to disappear into the houses and the shops and the streets were suddenly lit up by bright flashes of light with some very loud bangs. Poor Ravi was very frightened, he didn’t know what to do or where to go! A few minutes later, the flashes became brighter and brighter and the explosions got louder and louder and then, lots of big, heavy drops of water began to fall on him, blown by a very strong wind. The rain bounced off Ravi’s roof, making loud drumming noises and he felt more and more frightened and very lonely.

Ravi was soaked through. His brand new tyres were soaking wet and muddy and even his new padded seat was damp, but he had to carry on going through the streets until he could find some shelter. His windscreen wipers were going swish, swish, as fast as they could, but still Ravi could hardly see where he was going. Perhaps he could find his way back to the factory? He had always felt safe there, he was thinking. Turning a corner, Ravi finds a huge old Tata truck. Ravi approaches the truck cautiously. The truck is asleep and snoring loudly. Ravi is afraid of the truck, but he has no choice.. he snuggles himself between it’s tyres hoping not to wake him up, Ravi shakes the water off him , leans against one of the huge tyres and starts to sleep. But the truck opens one eye, looks down and discovers Ravi

what r u doing here??

Dear, dear, you’re going to catch a cold.. Here, here, don’t be afraid, I just get a little grumpy when I wake up that’s all. I am SRI the oldest truck in the city. What’s your name little one?

Is this the first time for you in a monsoon?

Well, a monsoon is when we get big flashes of light in the sky called ‘lightning’ followed by loud bangs called ‘thunder’, together with lots of water called ‘rain’ . First you see the lightning, then you hear the thunder, then the rain comes. You know why we see the lightning before you hear it’s thunder noise?

Ravi is engaged now, also feels safer despite the thunder and rain.

Because light travels faster than sound. You see before you hear.

Ravi is amazed by this piece of information. Sri who hasn’t had such a dedicated audience for a long time, carries on showing off his knowledge

Sri showing off ! Not only that, the most beautiful surprise after torrential rain is the fabulous rainbow which follows when the rain stops..

(Just as he says that, the rain stops, a little sunshine appears between the clouds)

Ah, there, you’re a lucky little one, look up

(Ravi extends himself and looks up, we see a glorious rainbow forming in the sky as Sri keeps explaining)

This is light is broken up by raindrops and it makes a great curved spectrum of colour. Some people even say there is a pot of gold buried at the end of a rainbow!”

This is the most beautiful thing I’ve ever, ever, ever seen since I left home!

So all this ligh-te-ning and th-thunder and rain, this Mon-soon is not dangerous after all

Well, yes and no.. The rain brings water that people need to wash with, grow their crops in the fields and cool everything down after the hot sun. BUT,(dramatically) if there is too much rain it can cause a flood.

Good Grief, you’re a curious little one RAVI. That’s another long story, perhaps some other day I tell you about the flood. I need to sleep now, I have to make a delivery very early tomorrow morning and I need to rest.

Looks like you can do with some sleep yourself,
(Ravi nods with droopy eyes)

OK, you can snuggle up here for tonight
until you find your own sleeping quarters..
Good night little one

Ravi snuggles between Sri’s wheels they both shut their eyes and start snoring gently.

“Well, that was my story for today, children. Now, it’s time for you all to go home and I shall see you all again another day” said the wise old man, standing up and climbing back onto his bicycle.

“Goodbye, Babu!” shouted the children as they ran off home, eager to tell their families all about Ravi the Rickshaw and monsoons.

The old man cycles out of the village just as the sun is setting.