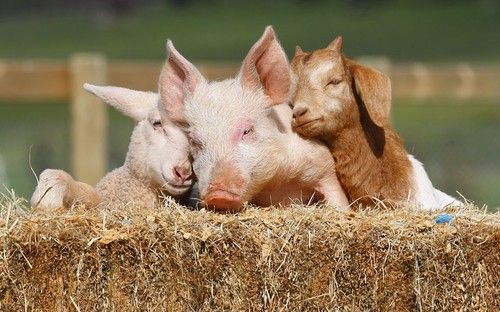 Once upon a time there was a Pig named Laali and the Goat named as Lilly. They had a desire to look around the hills and feel the fresh air. So they both decided to go to the hills, when their Master let them free on Sunday's. They were waiting for sunday very eagerly. That fine day has come. Laali and Lilly decided to go to hills. They were very excited to visit the top of the hills. Because they heard from their friend Lallu the sheep that their nearby hills will be beautiful, green, fresh air will be there and also lots of place to run around and play.
So, today Laali and Lilly hop,jump,run,walk to the hills by having so much fun. Soon they reached the hills. Once they reached the hills, they were really very happy.No words to express it because its their first time to visit the hills. Laali and Lilly had race that who is going to reach the top of the hills first. But still they went together.When Laali is tired, Lilly will stop and when Lilly is tired Laali will stop. Finally they both reached the very top of the hills.

They were really really very very happy and started feeling the fresh air. After that, they both run around and played together. They think the hills as a slide and they try to glide. They ran from top as "sweeeee " and from down to top as "ssswinnggg" . When they are hungry, they had some grass and carrots. After that they started playing again. They doesn't even know, how fast their day passed by.
Now they are very tired but still, they need to go back home. So they started walking before the sun goes down.And it took so much time to reach home.Since because they are very tired and played the whole day, they walked very slowly.And finally they reached home and started taking rest.Their Master saw both of them looking really very happy.From then on,Master allow every week end, both Laali and Lilly use to go to their nearby hills along with their friend Lallu the sheep and have fun. Now, Laali the Pig and Lilly the Goat is happy and also their Master is also happy.
The End