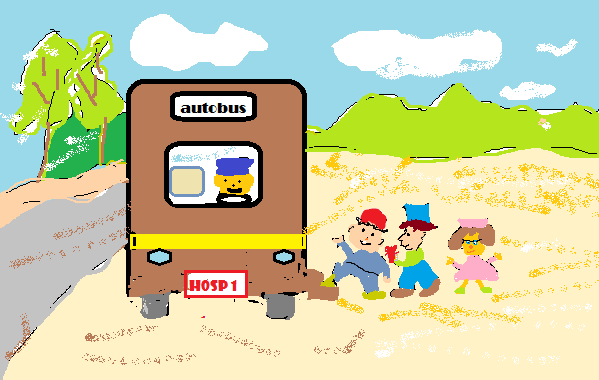 A few moments later, they ring the bell of Tralala.
Tralala opens the door and smiles: “What a surprise, my best friends Trilili and Trololo! Come in. I’ll make a cup of tea for the three of us.”
“That is great,” says Trilili.
“I agree,” says Trololo.
Soon they hear the whistle of the water kettle in the kitchen and a few minutes later they have their tea with a home-made piece of cake in the cosy house of Tralala.

"Did you hear the latest news?” asks Tralala.
“About what?” says Trilili.
“About Trululu,” says Tralala: “yesterday he fell with his bicycle and now he is at the hospital.”
“Oh, dear, he must have a lot of pain,” says Trololo.
“I have an idea, shall we pay Trululu a visit at the hospital?” asks Trilili.
Trololo and Tralala find it an excellent idea and a few moments later the three friends step on the bus to the hospital.
They have wrapped a piece of cake in paper with a nice ribbon. It is a present for Trululu.

Through a large revolving door the three friends enter the hospital. They like such a door that turns like a merry-go-round. But at the hospital you should not play in the corridors and you should not be noisy. That is why the speak very softly.

This hospital is huge with hundreds of corridors and a thousand rooms. They look around and wonder how they can find Trululu’s room. Then they see a sign with the word ‘Reception’. Behind the counter there is a kind lady asking them who they are and what they are looking for.
“I am Trilili,” says Trilili.
“And I am Tralala,” says Tralala.
“My name is Trololo,” says Trololo.

The receptionist smiles and says: “What adorable names you have. You must be paying a visit to Trululu?”
“How did you guess?” asks Trololo.
“There is only one Trululu in this hospital and with names like yours I was sure you were looking for him,” says the friendly lady and she adds: “Trululu is in room 312. Take the elevator to the third floor and then you turn to the right. The room is on the left side of the corridor.”

They zoom to the third floor and can hardly control themselves not to run to Trululu’s room, but they know that you should not run in the hospital’s corridors.
Just in front of the door with Trululu’s name, the three of them rush inside.
Trululu lays in a huge bed and his right leg is wrapped and hangs on a chain with a hook.
There is a nurse in the room who screams: “Ho, ho, ho, easy does it or you will break your legs as well!”

Trululu is full of joy. His friends thought of him and they even brought him a present.
Trilili, Tralala and Trololo are eager to know about Trululu’s accident. They hold their breath when Trululu tells them what happened.

In the meantime, the lady with her white coat gently slips out of the room. The nurse has already heard Trululu’s story plenty of times.