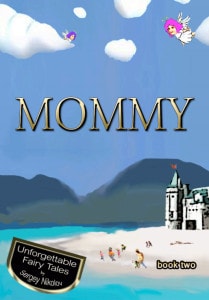 In a splendid castle on the ocean shore there lived a King. The poor man had lost his Queen in childbirth, just as she had given life to their
first-born daughter, Princess Selena. Following that miserable day, the King would not let his little daughter, Selena, out of his sight, for he knew he would not be able to live with himself if anything happened to her, too.

One evening Princess Selena asked her father: “Daddy, could you not hold my hand when we go to the seashore tomorrow?”

“You’re too young for that, darling daughter.”

“You may fall and hurt yourself.”

“But, Daddy, the kids don’t want to play with me when you’re holding my hand.”

“I told you, my love, you are still too young.”

The King kissed his child goodnight and fell asleep. Princess Selena, however, was so sad that she spent almost the entire night crying.

“If I only could play with the kids for a while…” her thoughts tortured her.

The next day the princess woke up sick and could not get out of bed all day. A day later her condition remained unchanged. Thus passed an entire week. Young Selena’s fever would not break in spite of the good care of the best healers in the kingdom.

At the same time, in heaven, the two angels, Pinky and Violet, were playing hide-and-seek among the clouds.

“Because it’s boring to play with just the two of us.”

“It is not!” Pinky responded, offended.

The voice of God echoed at that moment: “Don’t fight, kids.”

“Please, God, please, send us a friend to have fun with,” passionately implored Violet.

“Violet, listen to me. Two are few, but three are one too many!” the voice of God responded.

“But we are bored with just the two of us here,” Violet stubbornly held out.

“You always find fault in everything,” Pinky shouted.

“Then, I’m just not going to talk to you anymore!” Violet retorted, stung by his comment.

“As if I care!” Pinky cried, even more irritated, before flying away.

“Violet, two are few, but three are one too many,” the voice of God reiterated.

“Alright, then. So be it!” God’s voice echoed among the clouds. Almost immediately, down on earth, the illness defeated Princess Selena, and she weakly closed her eyes.

The poor King could not let go of her little body in his arms.

“Wake up, Selena,” he cried. But the princess did not open her eyes, as by that moment she was already engaged in play with Pinky amidst the clouds.

At last, the young princess’s wish had come true, and she couldn’t get enough of the games and fun shared with her new friend, Pinky.

“Pinky, you seem to have forgotten all about me in such a short time,” Violet announced angrily the next morning. “Didn’t you say that you didn’t want to play with me? Because I was too boring.

Violet didn’t say anything. She was just about to fly away from them, when she heard the voice of God.

“Didn’t you request a playing friend? Why are you crying now?”

“Because I lost my friend.”

“This is what happens when you don’t listen to me.”

“I want Pinky back,” the angel started weeping harder.

“Okay, Violet, I’ll make your wish come true, but only if you tell me what the moral from all of this is.”

“Two are few, but three are one too many.”

“Correct!” God’s voice replied. And just like that, Princess Selena opened her eyes in her father’s lap.

The King beamed happily, but his smile soon faltered.

“Daddy, I had so much fun in the clouds. We played whatever we wanted. But you weren’t there, and I missed you…”

“This is all my fault,” the King wailed. “It was because of me that you got ill, my child. I almost lost you… My darling daughter, I’ll never stop you from doing anything anymore. I promise!”

“You won’t hold me by the hand when we are at the beach?”

“Thank you so much, Daddy,” the princess rejoiced.

At last, everyone was happy.

Princess Selena found lots of new friends at the beach, while the two angels, Pinky and Violet, grew closer than ever.

Princess Selena grew more and more, until one day she married the brave and handsome Prince Kodor. But even though they lived in happiness and bliss, their cradle remained empty of an offspring for a long time. It was not long before the people of the kingdom started to worry that there was no heir to the throne, while Prince Kodor and Princess Selena grew ill with sorrow. It was at that time that Violet was wandering from cloud to cloud in heaven, looking for Pinky.

“Ha, there you are. I have been looking for you.”

“Why were you looking for me?” Pinky inquired.

“Because it’s been so long since I played with Princess Selena. She was so nice and kind. I miss her!”

God’s voice echoed through the skies then: “Do you want to see her again?”

“You’ll find out,” the voice of God responded, just as Violet burst into tears.

“Pinky, what am I going to do without you?”

“Who says you’ll be without him? Ha-ha-ha…” As soon as God started laughing, the two angels found themselves in Princess Selena’s belly.
Nine months later, when the princess finally gave birth, the King went to visit her. “Dear daughter, now you’ll have to be twice as responsible, as you’ll be taking care of both your husband and your first-born child.”

“What’s so funny?” the King asked.

“Come with me to the nursery, and you’ll see for yourself,” Princess Selena informed him.

When he entered the nursery, the King saw not one but two cribs.

“Do you see now why I was laughing, Daddy? It’s because I have two children. That’s Pinky in the pink crib, and Violet—in the purple one,” the princess proudly announced.

The King was speechless with happiness at first. But shortly thereafter, he came to himself and once again started to fret over his daughter. “Dear daughter, two children bring twice the happiness but also double the responsibilities.”

“Stop worrying so much about me, Daddy. Now I’m a grown-up and a Mommy!”

+45
Are you sure you want to report this content as inappropriate?
Report