Mermaid Adventure in the Magic Shed

Once upon a time there were two girls and they were best friends so it was lucky that they were neighbors. They were both 7 years old and loved adventures. Their names were Molly and Sophie. Molly wore a bow, a ballerina skirt and a white shirt. Sophie wore a flower in her hair, two bracelets, a shiny dress and a big red belt. 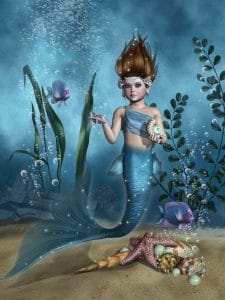 One Saturday morning, Molly got dressed to go to Sophie's house after breakfast. Molly and Sophie went to play in Sophie's shed. Molly found a loose plank in the shed wall with water pouring out of it. Molly removed the plank and found a tunnel. Molly called Sophie who was looking at all the old gadgets. "Look at this" Molly whispered. "It looks like a tunnel" said Sophie. They went inside the tunnel and at the end there was a door with a knob. Sophie opened the door and the saw the ocean!!

Just then, Sophie heard a voice calling "Help! Help!"  She said to Molly, "I hear someone calling for help and it's coming from that cave.  Let's go and check it out."  So the two friends swam down to the spooky cave. "It looks like a prison" said Molly. "I see something glittering...it's a crown!" said Sophie.  "A princess must have been kidnapped," said Molly.

"I wish we could turn into sharks then we could get the keys guarded by those sharks." Instantly they turned into big, toothy sharks!  They were able to trick the real sharks into giving them the keys and they freed the princess.

She had silver hair, aqua green eyes and coral pink skin.  Molly asked "How did you end up in the prison?" "Kidnapped" she said.  "Sorry I haven't introduced myself.  I'm princess Oceana of Pacific and thank you for freeing me.  Now follow me to my father's castle."  When they reached, the king was so overjoyed that he gave Sophie and Molly two magic necklaces so they could visit anytime.  They used the necklaces many times for lots of new adventures but that's a story for another time!