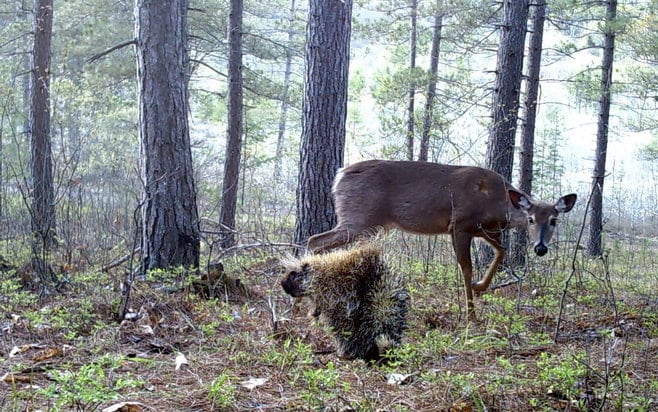 The trees were full of ripe bananas Ted the monkey smacked his lips in glee. The owner of the house and garden was Mary the deer, she had a dog called Bruno whom she had kept to scare monkeys away but Bruno had become old and did not have the strength to run after Ted. Mary deer was at her wit’s end, her income depended on the sale of bananas and some vegetables that she grew in her kitchen garden.

Ted had become a regular nuisance every afternoon he would alight on the wall of the house devour some bananas and swing away. One afternoon Dodo the porcupine was on his way to meet his friends when he saw the monkey munching bananas. He knew the house belonged to Aunt Mary who had saved his life once.

Dodo still young had ventured to the end of the forest when a truck coming for logs had hit him. Dodo lay on his side bleeding and it was Mary deer out visiting her aunt in that part of the forest who had applied the right herb and stopped the bleeding. Mary did not even know Dodo then and he was touched by her kind gesture.

Dodo stared in anger at Ted suddenly he started running backwards the quills got detached from his body and flew towards Ted stabbing him on all sides. Before long Ted was rolling on the ground and crying in agony“Stop Dodo stop” Ted pleaded.
“I will if you promise never to visit this house again “Dodo said.Ted promised before limping away. Mary who heard Ted’s screams came out of the house and thanked him profusely.
Dodo was happy that he could repay Aunt Mary’s kindness in his own way.