In a small town in Wales, there lived a girl.  Her name was Emily and she was 8 years old.  She lived in a small house with her parents.  She was a very nice little girl, whose eyes shone always with a sparkle.  She had a small round nose and tiny red lips--lips as red as a rose.  She was such a cutie pie that everybody called her “Twilight Sparkle.”  She loved to leave her curly hair loose.

Emily liked everyone in her town, florist, baker, butcher, driver and every other person around.  She had many friends and loved helping people.  She was polite to all and well mannered.  She even offered her seat in the bus to elderly people.

Lavender, also 8 years old, was studying in the same school as Emily.  Lavender hated the goody-goody Emily.  She found others' praise for Emily, very annoying.  She was very good at studies but she never helped anyone and was mean and selfish.  Lavender wanted to put Emily down; she was so mean that she even wanted to hurt her.  She began plotting some schemes to hurt Emily.  Once it so happened that Emily and all the other class girls were standing for the assembly prayer. Emily stood just in front of Lavender, and Lavender’s friend Alesha (the only friend Lavender had) stood in front of Emily. They were all queued up for the assembly. Lavender devised an evil scheme, to push Emily down.

At that moment, Emily just bent over to tie her lace, and instead, it was Alesha who fell down.  She felt humiliated and swore never to talk to Lavender again.

This did not stop Lavender from harming Emily again.  Another day, in the class, Lavender rose her hand to answer every time the teacher questioned, despite not knowing the answers.  She wanted to impress her teacher.  But then, her plan back fired and her teacher asked her to answer.  She stood and embarrassed herself by mumbling in front of the whole class.  This was basically to become famous and it flopped.

All this while, Emily knew Lavender's hatred. She felt bad that she could not be friends with her. Lavender tried hurting Emily in one way or the other. Though Emily tried convincing her, it was in vain.

One stormy night, Emily skipped her dinner. Heavy hearted, she went to bed. The clock struck 12, the wind howled, the rain slashed, the trees swayed, thunder struck with lightening, adding fuel to the storm. Emily dreamt. She saw a fairy in her dream--a fairy who was so pretty, 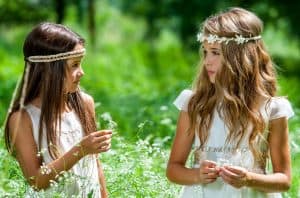 wearing a white frock with a magic wand in her hand. The fairy touched her with the wand, and Emily felt a chillness--a chillness that ran to her spine. The fairy spoke, “Dear Emily, I have a gift for you. For all the good deeds you have done, you have proven that you are worthy of this gift. I give you the power to change bad people into good ones.”

The next day, everything seemed to be different. Emily found Lavender talking to her after apologising for what she had been till then. Emily believed that it was not a dream, but truth.

Emily had no more enemies. They all lived happily and helped everyone.