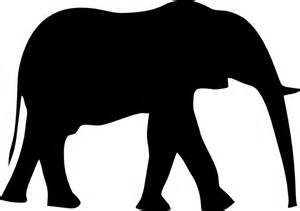 Due to a mix up by a very well respected but somewhat clumsy shadow seamstress, a little girl called Daisy Pumpkin woke up one morning with the shadow of a fully grown African Elephant. Daisy stood in front of a large white wall and watched in disbelief as the elephant’s shadow copied her every move. When she moved her head the elephant shadow moved its head, swinging its trunk from side to side. When Daisy hopped on one leg so to did the shadow. She jumped, she span, she twirled and each time she did the elephant’s shadow copied her exactly. This was not what Daisy expected by any stretch of the imagination. Quite soon, a few people stopped to see why the little girl was jumping and dancing in front of the wall. The people were shocked when they saw Daisy’s elephant shadow.
‘That’s spectacular,’ said an old lady.
‘That’s superb,’ said an old man.
‘That’s witchcraft,’ said a really old lady.
In a short space of time a crowd had gathered and they all hustled and bustled to get to the front to watch Daisy and her elephant’s shadow. Up to that point Daisy had been just an ordinary little girl but now she was someone special. People asked for her autograph and demanded she took photographs with them.
‘Make it jump,’ shouted a little boy.
‘Do a spin,’ said another.
‘Stand on your head,’ screamed a little girl.
Daisy did everything they asked of her and after a few minutes she felt dizzy what with obeying everyone’s requests. It was the strangest feeling. The night before she had gone to bed as a normal little girl and now she was the centre of attention. From that day on she couldn’t walk anywhere without people pointing and staring. In the space of twenty-four hours Daisy turned from ordinary little girl to a superstar celebrity. The local newspaper called her an AMAZING talent. A science magazine called her a medical phenomena. Everywhere she went people asked for photographs and autographs. They were always excited to see the elephant shadow and would scream at Daisy to make it twirl, jump, and spin. She spent the summer holidays attending parties with pop-stars and premieres with superstar actors. She was interviewed by celebrity magazines, TV shows and was even invited to tea with the Queen. Daisy was happier than anyone who had ever claimed to be happy.
One day, near the end of summer, Daisy was performing in the park when a grumbly black cloud sailed over the town and stopped in front of the sun. The park went dark, and as suddenly as it had appeared, Daisy’s elephant shadow disappeared. The crowd booed and shouted for the elephant’s shadow to come back. Daisy pleaded with them to wait. She carried on dancing but without the elephant's shadow copying her movements Daisy was just another little girl who liked to dance. The crowd got bored and left the park leaving Daisy alone with no one to perform to. It started to thunder and rain. Daisy trudged home drenched with sloshy shoes and a tear streaked face and no sign of her elephant's shadow. A few weeks went by and the elephant shadow became just a memory. Everyday was grey, and rainy. Puddles covered pavements and park benches became deserted ornaments. No one asked for photographs any more, and the invites to parties and premieres stopped coming. Life became so dreary that Daisy stopped going out. She stayed at home in her pyjamas day after day, staring out of her rain-trickled bedroom window, hoping and praying for the sun to shine again.