ONCE UPON A time there was a little boy named Jeremy…

Jeremy climbed into bed, he was seven now but he still liked his mother to read him a bedtime story.

“Once upon a time long ago…” His mother’s voice lulled him off to sleep, her words soft and soothing when suddenly she was shaking him awake.

All of a sudden he was sucked into a giant rainbow and when he opened his mouth orange and yellow bubbles flew high up into the air. He jumped into green and bounced high into brown, purple stayed firmly planted on the ground. A bright orange pumpkin man laughed out loud, as brown turned to yellow and then into a cloud!

“My boy you are having so much fun. How does it feel to be inside colours that run?”

“It’s wonderful and slippery, slimy, too, but the colours seem to like me. Do you want to have a go, too?”

The pumpkin man smiled again, shook his head and jumped one step ahead. “I can’t see you, I have to guard all the colours for Halloween.”

“Okay then, watch me.” Jeremy called jumping from colour to colour like he was on giant marshmallows.

He bounced high into the air and grabbed hold of the colour orange and pulled and pulled until it was big enough to hide behind and then it turned to white. The colours were fading. “Where are you going?” He asked confused and a little sad.

The colours yelled loud and clear. “It’s nearly Halloween, we can’t be here.”

“You can’t find me." Jeremy giggled running up a hill made of rocky road. He took one step and sunk in the jellied marshmallow.

Pumpkins sat watching him through black eyes and cats that should have been black stood tall and grey.

“Halloween is on its way. Don’t be afraid come out and play.” He called pulling some lollies from his pocket.

Suddenly the pumpkins glowed a sunburnt orange, black cats ran through colours and lollies all different sizes fell from the sky. Jeremy smiled, he knew it was Halloween and now they all wanted to be seen.

He bounced in the colours with ghosts and ghouls and carried a pumpkin on a stick that looked like a broom, spiders came out and ran through their webs and he saw that his toes were green and his fingers red. Without thinking he poked his head into a blob of purple, and then a bird landed on his head.

“Hello Mr. Bird. What are you doing here in our colours?”

“I came to fly amongst the colours of Halloween because you see sometimes the colours can’t be seen, some don’t believe in Halloween.”

“I know and you made Halloween come alive and the colours came out to stay.” 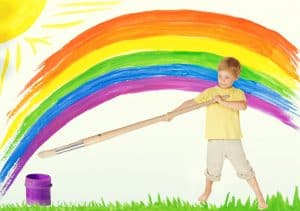 Then to Jeremy’s surprise he jumped high in the air and landed in a blob of red and purple paint. He woke up with a start.

“Where have all The Colours Gone?” He asked his mother who was sitting on his bed.

“I think you were dreaming darling. Remember I read you the book about Halloween before you fell asleep.” His mother replied.

“Can we read another bedtime story tonight?”

She smiled and kissed his head.

Jeremy couldn’t believe his eyes, on the back of his door was a painting of ghosts, and pumpkins, cats and witches and a great big pot full of lollies! The colours of Halloween were here to stay!