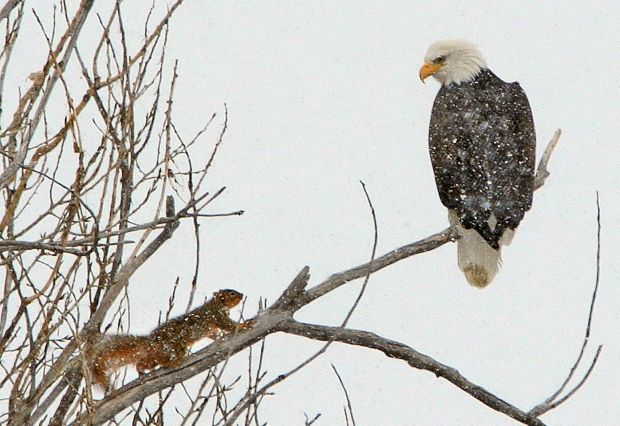 Dina eagle was a deadly hunter she could stay aloft for hours searching for her prey and had incredible keen eyes. Squirrels were her most favourite prey though she liked rabbits and rats too. Animals were scared to come out of their homes even for food. They racked their brains in search of an idea to get rid of the eagle menace permanently.

It was Bunny rabbit from the village at the end of the forest she had come for help, a vixen had been troubling the village people by stealing their hens and ducks and escaping suggested a plan that could eliminate both the vixen and the eagle. Bunny had come at night to the forest but since then had not been able to return to the village for fear of Dina.
“There is a spot between the forest and the village and one has to lead the eagle till that point I have seen the end of many eagles there”.Bunny said.
The idea was very risky the eagle could swoop down anytime and take the animal leading her.
Timmy the squirrel decided to volunteer. The other animals tried to dissuade him but Timmy was adamant.
‘’ I will hide in the holes of trees and the eagle will not be able to get me.” Timmy said.

Woody the woodpecker made holes on trees big enough for Timmy to get in.
One fine morning Timmy came out of his home and scampered up the nearest tree and got into the hole. Hearing the rustling of leaves Dina saw Timmy but could not get him. From one tree to another Timmy led Dina. Frustrated and livid with rage Dina followed Timmy but could do nothing the eagle could not enter the hole and get the squirrel. They were nearing the end of the forest,when suddenly Timmy spotted the vixen near a rock he made a barking sound in order to disturb the animal and attract the eagle’s attention before taking shelter on the last tree. The vixen startled out of her sleep made a howl like noise.
Dina saw the vixen swooped down and dug her talons on her shoulders a struggle ensued and the vixen in order to escape fell into a gorge at the side of the forest.One enemy was wiped out the little squirrel thought.

This was the moment Timmy was waiting for he identified the spot Bunny had told him by the side of the pole made as much noise with the leaves as he could. Dina who was soaring high trying to regain his strength after the exertion of a tussle with the vixen heard the rustle of leaves saw Timmy and in rage swooped down Timmy closed his eyes his end was near he was sure, suddenly there was a thud the eagle lay dead on the ground electrocuted by the overhead line.Timmy was standing near an electric pole. “I have seen the end of many eagles there”. Bunny rabbit had rightly said.
Timmy heaved a sigh of relief and everyone praised the little animal’s heroic deed which had saved the lives of so many animals.