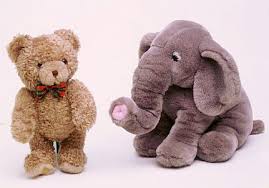 A rock had blocked Jenny bear’s cave, Albert elephant on his way to visit a sick aunt living at the end of the jungle heard little John Jenny’s cub crying. Albert was a kind hearted elephant he put down the basket of bananas he was carrying for his aunt and started to lift the rock that blocked the mouth of the cave.

Charlie monkey sitting on a tree saw the bananas in the basket and while Albert was busy Charlie lifted the bunch of bananas and scampered off.

Jenny who had returned with food for her baby was overcome with gratitude when she realized what Albert had done. The rock which had come loose after the landslide had rolled in front of the cave and blocked it only after Jenny had left. Jenny thanked Albert profusely. The elephant was about to leave when he noticed that the basket was empty and the bunch of bananas he was to take for his aunt missing. Albert searched here and there but could not find the bananas. It was then that Judy squirrel informed him that Charlie the monkey had stolen his bananas. Albert was miserable but did not know what to do.

Even though Jenny gave Albert some raspberries that she had collected in the forest to take for his aunt the two friends were filled with anguish. Each day some animal or the other would suffer because of Charlie. He would destroy gardens, eat mangoes, bananas and anything he could lay his hands on. Albert was too kind hearted to take revenge however Jenny thought of teaching Charlie a lesson.

She decided to take help of Tootsie the leech and her friends. Bob the rabbit was also roped in to play a part. He readily agreed to help since the monkey had uprooted all the saplings in his garden just for fun.

“Cover us nicely with flowers”, Tootsie said. It was evening Bob carried a basket full of white flowers on top were two bananas. He stopped under the tree Charlie sat on. Seeing the bananas Charlie scampered down the tree. Bob sat under the tree, “I am so hungry and tired.” he said. He started peeling a banana and bit into it. Charlie looked wistfully at the other banana, “They are damn sweet,why don’t you try one?” Before Charlie could grab it Bob had it in his hand “There are plenty inside “, Bob pointed to the basket “Why have you covered the basket with flowers?” Charlie asked perplexed.
“Can’t take the risk of them getting robbed they are for special friends like you.” Bob encouraged Charlie to take a banana.
Hungrily Charlie dug his fingers inside the basket and with a yelping pain tried to extricate his hand while a dozen leeches bit into his flesh. Charlie cried for mercy and it was only after the other animals who had been waiting behind trees decided to forgive Charlie after he promised never to harass anyone again that the leeches decided to let go of him.