A Rainbow Rider's Fall to Yorn

A Rainbow Rider’s Fall to Yorn

Raina is a rainbow rider. She lives in the sky and, whenever sunshine and rain come together, she rides their rainbow down to earth. Raina’s journey may be only a moment or last many minutes, but it is always magical. She glides through the air on top of the rainbow and slides down its arch until it reaches the ground. As a rainbow rider, Raina possesses a special spirit, filled with color and light. The joy and wonder of her journey is conveyed to the world below and stirs emotion in mankind. Even the busiest individual, when faced with a rainbow and the feelings of Raina the rider, will pause to appreciate nature’s beautiful gift. After her journey, Raina is called back up to the sky. There she remains with the elements, in a place between the clouds and the twinkling stars, until it comes time again for her to glide over the colors to the ground below. 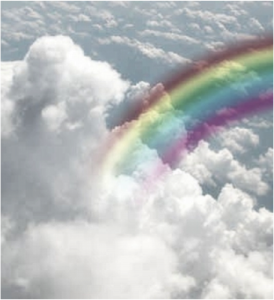 Raina often looked down at the land, as it rushed up to meet her rainbow. She wondered about the people she’d glimpse and their way of life. She knew it surely was different from hers in the heavens. Raina thought mankind must not have much color in his life or be very happy. She knew people on earth didn’t always appreciate nature which was why she existed as a rider.  While Raina was curious, she belonged to the elements and followed their rules. She believed in the order of the world and accepted her place within it. The most important rule was that a rainbow rider is only felt and never seen by anyone on the ground below. No rider ever broke this rule, until the day that Raina fell off the end of her rainbow and into the village of Yorn.  Travelers passing through the village of Yorn remember a charming place, filled with kind people who enjoy life’s simple pleasures. They start their day with a warm drink and greet one another with a smile. Yorn sits nestled in between two large mountains whose tops are covered in a soft purple mist.  One particular day, it had rained for a time over the village, giving the soil a soft, steady drink. After awhile, the rain stopped, the clouds cleared, and the sun shinned its light through the moist village air.  Boris the baker was hurrying home to take a cake out of the oven, when he’d paused to see a pretty rainbow in the distance. He had been quite cross that day, after having burned two batches of bread in his new oven; however he felt delight upon seeing the rainbow and forgot all about the blackened buns.  The postman, Mr. Potter, was wrestling with his packages and dropped them in a puddle with a big splash. Frustrated, he picked them up and was shaking off the wet parcels when he spied the rainbow. When his eyes settled on the soft colors curving above, he smiled and no longer cared about the damp boxes in his hands.  Also seeing the rainbow that day was little Grace Elizabeth, who was having a birthday party that afternoon. Grace Elizabeth was a happy girl, who enjoyed painting with water colors and eating fresh peaches. She had big blue eyes and bouncy brown curls and would play for hours with Clementine, her fat orange cat. Her mother was waiting for the baker to finish Grace Elizabeth’s cake while she decorated the house with pretty bows and balloons. Grace Elizabeth was sitting at the garden gate, picking some flowers to bring inside, when she saw the shimmering colors above. She felt a rush of joy and a sudden swoosh in the air around her. A light seemed to be coming down from the sky, like a small sun, and she closed her eyes against its brightness.  Grace Elizabeth heard a thump in the direction of the rose bush and opened her eyes. She looked at the bush and its leaves were shaking and branches quivering as if something landed in it. She went over to the bush and saw the most amazing thing! Inside there was a luminous girl, about her size, who looked very strange. She was dressed in flowing robes of swirling colors and was radiating light. The girl had soft violet eyes, long golden hair which floated around her in a sunny cloud, and skin the lightest shade of pink. The girl was startled to see Grace Elizabeth and very surprised to be in the rose bush.

“Don’t be afraid,” Grace Elizabeth said to the girl, “Everything is all right. What is your name? Do you need help getting out of that bush?” The girl just looked at Grace Elizabeth but didn’t seem frightened.  “Can you talk? Do you understand me?” Grace Elizabeth asked.

The girl nodded her head and then said hesitantly, “Yes, I do. I’ve heard all of the languages of the world because my rainbows have appeared everywhere.” She stood up and carefully freed herself from the bush. Rays of light shinned through the air as she shook rose petals out her golden hair.

Grace Elizabeth was enchanted by the girl’s bright beauty. “What is your name?” she asked, “Are you some sort of sorceress?”

“My name is Raina,” the girl said proudly, “I am a rainbow rider. We live in the sky above and share the joy of our journey down the rainbow with mankind. My rainbow led me here but I slid too quickly and must have fallen off.” She said with some surprise. “It’s never happened to me before.” She explained.  Raina looked at wide-eyed Grace Elizabeth, “What do they call you here? And where is this place that I’ve landed?”

“My name is Grace Elizabeth,” she answered, “And this is the village of Yorn. I didn’t know rainbows had riders but I’m very pleased to meet you.”

Raina thought for a moment. “I very much like the purple mist around your mountains and the blue of your eyes. I wonder,” she continued, “Do you think I could look around a bit before I go back? I’ve only seen the ground before from a distance.” She glanced up at the sky for a moment but all seemed quiet.

Grace Elizabeth was delighted to spend time with this special girl. “Of course you can,” she said. “I am even having a birthday party today and would love for you to come. I’ve never seen anyone like you before.”

“You are not supposed to see me,” laughed Raina, “You’re just meant to feel what I am feeling. However, I would very much like to stay anyway….just this once.”

The two girls smiled at one another then Grace Elizabeth took Raina’s hand. The new friends walked around the pretty garden. Raina marveled at all the colors. She lay on green grass and laughed at yellow bees buzzing on pink flowers. She tasted sweet red strawberries and ran her fingers through rich brown soil. She paused to pet orange Clementine and put her face up to the wind. Raina smiled, “The wind feels the same here as it does in the sky.” She said happily.

The rest of that afternoon, they talked about their lives and shared the secrets in their hearts, as only young girls can do. Raina described how it was to live in the sky and the joy she felt as a rider. Grace Elizabeth told of the caring people in Yorn and how happy she was with her parents, friends, and Clementine.

When it came time for Grace Elizabeth’s party, Raina climbed up into a big oak tree which sat in the backyard and overlooked the house. “I cannot allow more people to see me.” She explained to Grace Elizabeth. “However, I would like to stay here and watch for awhile. After your party, it will be time for me to go.” 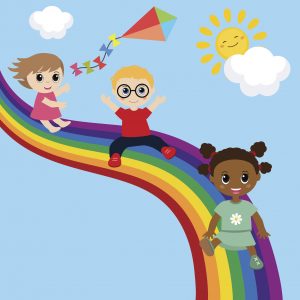 Storm clouds were gathering and Raina knew, after the rain, a rainbow will be sent for her to ride home.  From her seat in the tree, Raina heard Grace Elizabeth’s friends and family sing a birthday song. She saw them give her pretty presents and embrace Grace Elizabeth with happy hugs. Raina was touched by the warmth and love they had for her friend. Grace Elizabeth snuck out of the house and handed up into the tree a piece of Boris’ birthday cake. Raina tasted the soft yellow cake and smiled with delight as the sugary frosting melted in her mouth.
After the last of the revelers called their good-byes to Grace Elizabeth and the rain stopped, Raina floated down from the tree. A rainbow could be seen in the distance.

“Do you really have to go Raina? There is so much more I want to show you.” Grace Elizabeth said.

Raina replied, “You have already taught me so much. I thought mankind didn’t feel happiness or have any color in his world and I was wrong. You also showed me how special it is to have a friend and I will carry the feeling up into the sky with me.”  Raina embraced Grace Elizabeth. “Whenever you see a rainbow, think of me.” With that, she left Grace Elizabeth’s garden and went down the path which led out of the village, in search of the rainbow’s end.

Time passed and Grace Elizabeth grew up in Yorn but she never forgot about Raina. She remembered the reason for riders and learned to not just look at nature but to feel from it. Grace Elizabeth closed her eyes to the beauty of a breeze and let sunshine warm both her skin and spirit. She reflected on raindrops and smiled seeing a sunrise. Grace Elizabeth was filled with joy and didn’t need the emotions of a rider. However, when she saw a rainbow she would feel something unlike anyone else–the closeness of a friend.

Copyright of this story Cathy Predmore, 2009. All rights reserved.