Max dog and Lucy crow were the best of friends. But theirs was a strange friendship, since Max was deaf and Lucy was lame. Having damaged her left wing and leg, which had been crushed under the wheels of a car, Lucy could not fly. So, the whole day, she sat perched on Max’s back and the dog carried her to places, where food was available, like the roadside dustbins and parks.

The two friends were happy in each other’s company and loved and respected each other. 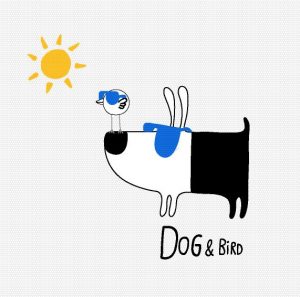 The other animals, in the neighborhood, also appreciated this queer friendship and always encouraged it. However, disaster struck one day, with the advent of the monsoons. The entire area was flooded. As a result, men and cattle died and houses were ravaged and vegetation was destroyed. Sick and cold, Lucy and Max decided to leave the area and move to a new place. Carrying Lucy on his back, Max trudged along the road, stopping only at night to rest.

Eventually, they came to a new town, where the people were rich and dustbins and roadsides were always littered with food. Max and Lucy decided to stay and make it their new home. They were happy but the others were not. They became jealous of the two friends. Leo a street dog, called Max a fool and said, “You are a stupid crazy dog.” Why else would you carry that lame crow on your back. What use would that useless bird be to you?” Chinni sparrow called Lucy a parasite and rebuked her for taking advantage of a poor deaf dog. The crows of the locality did not talk to Lucy since, instead of their company, she preferred to be friendly with Max. For their part, the street dogs avoided Max, since he had lowered himself by keeping company with a common crow.

Hearing all this, Max only laughed but Lucy became sad. “I am useless,” she thought. “I have always let Max do everything for me, but I have never done anything for him, nor helped him in any way”. As days passed, Lucy became more and more sad. “I must do something for Max, to show him that I love and appreciate his friendship a lot.” One day, it was afternoon, Max was sleeping on one side of the road. Lucy, who was sitting near Max, suddenly spotted a large meat bone that had fallen on the ground, from the butcher’s shop on the opposite side of the road. Her eyes lighted up. “Let me get that piece of bone for Max. Thinking so, she limped across the road, dragging her left leg. Bending she picked up the piece of bone, with her beak and was crossing the road, when she saw a car coming at full speed, serving to the left and right. She also saw that Max had turned over in his sleep and was now, stretched halfway across the road. “I must warn him”. Lucy panicked and thought. Acting on an impulse Lucy threw the bone with all her strength, at Max. Startled, Max opened his eyes and saw the car. Acting instantly, he jumped across to safety.
Lucy had saved Max’s life, all the animals and birds now started respecting Lucy.