Mud Puddles, a Dragon and a Giraffe

Jeremiah’s feet landed in the middle of the murky waters of his Mississippi mud hole. Splash-splash and ‘slop—slop, slurp,’ went the water and mud as it lapped over his white sneakers. His mom’s voice echoed briefly, “Don’t get those new sneakers dirty, or I’ll hit the roof Jeremiah.” He scooted his feet to the left, then to the right, getting the most splatter effect possible from twisting his sneakers. It sure was fun outside after a rain; there were mud puddles, crawly worms, and even the air smelled wet. Mississippi must be the best place to live in the whole world!

Jeremiah smiled and looked down at his sneakers; Mom’s voice was more clear, “Don’t get those new sneakers dirty, or I’ll hit the roof Jeremiah.” Cold sweat beaded across Jeremiah’s forehead and the back of his neck prickled with guilt. His stomach leaped up his throat and tried to jump from his mouth. He clasped his hand over his lips just in time. Mom said she ‘would hit the roof’ if he ruined another pair of shoes. Mom never broke a promise; and he was afraid if she saw his shoes, she would hurt herself when she ‘hit the roof’. It was up to him to keep his mom from being hurt.

Jeremiah was eight, but he recalled Mr. Ben his second-grand teacher saying that he was a smart intellect. Think—he had to come up with a plan. The answer came as easy as slipping a brownie from Aunt Kim’s bakery when she wasn’t looking. He knew what to do.

He scampered to the rear of the house and sat down on the steps leading to the garden. He tugged off his shoes, wiped the mud from them onto his face and shirt, and then tousled his hair for ‘effect’. He threw his shoes in the garden’s compost pile and dashed back to the front of the house. Sadie, his golden retriever, thought he was playing with her as he passed; but he ignored her.

Jeremiah’s mom came to the front door, “Jeremiah, what’s wrong, where are you?” She pushed the door open looking toward the front yard.

He stumbled in front of her, moaning, and collapsed to the ground, “Mommy…I’m here,” he said more faint this time.

“For gracious sakes, what has happened to you and where are your shoes?”

“It was awful, Mommeeeee, just awful.

A great big dragon jumped out from behind the tree and landed on me. I swear I didn’t do a thing to him; he just came at me. He tried to eat me, but I kicked and kicked so the only part he ate was my sneakers. Oh, Mommy, I’m so sorry he ate my new shoes!”

Mom looked a bit puzzled said, “If a dragon ate your shoes, where is he?”

Jeremiah knew what his Mom was trying to do, but he was still in control, “After the dragon ate my shoes, he laid down across the sidewalk. Then, this great big giraffe came running clumsily down the same sidewalk, scooped up the dragon and swallowed him whole.

What could I do? There’s no way I was putting my hand down a giraffe’s throat, my arms are too short!”

Sadie darted to the front porch and then circled Jeremiah. She dropped something at his feet then tackled him to the ground. Mom reached down and picked up Sadie’s gift of a white sneaker covered in mud and compost.

“Well, what do you know?” Mom said, handing the sneaker to him.

“Well, Mom….Sadie is a ‘real’ retriever I suppose. She braved the dragon and giraffe to ‘retrieve’ my shoes,” he said pursing his lips and wrinkling his nose. Sadie was too good a retriever. 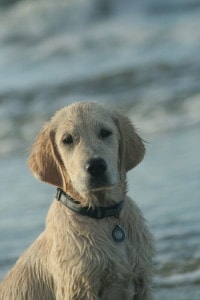